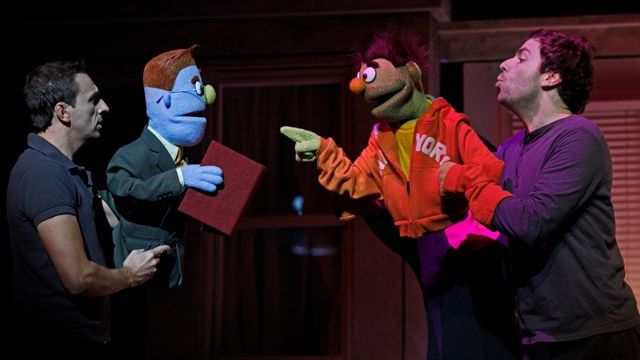 Avenue Q might be the worst address in New York City, but who knew such fun was going on there. This production of the 2003 Tony Award Winning Broadway musical is hilariously funny, outrageously irreverent, and a total cosmic comic blast. A cross between Sesame Street and South Park, 10 actors using hand puppets, tell a contemporary tale about thirty-something’s, ten years out of college and still trying to find a job and their way in life. In a brilliant ensemble cast those that stood out only did so because they got more stage time. Mitchell Butel as Princeton/Rod was terrific, but Natalie Alexopoulos had a slight edge on him, vulnerable and warm as Kate Monster, and raucous and vulgar as Lucy T. Slut. Luke Joslin (Nicky/Trekkie Monster), David James (Brian), Leah Howard (Gary Coleman), and Christina O’Neill (Christmas Eve), also did excellent work. If you haven’t heard the score, don’t worry, the songs are jaunty, somewhat familiar, and ear-friendly. Song after song landed, not surprising with titles such as “Everyone’s a Little Bit Racist,” “The Internet is for Porn” and “I’m Not Wearing Underwear Today.” Jonathan Biggins’ direction was sharp and right on the money, as was Michael Azzopardi’s musical direction. Avenue Q might be the worst address in New York City, but everyone should go visit this collection of crazy, lovable characters. You won’t be disappointed.
Peter Pinne

What a pleasant surprise! It would be easy to assume, based only on what you had heard about Avenue Q, that you are in for a night of crass, below the belt, low intelligence, toilet humor, aimed at impressing the majority and alienating a minority. But Avenue Q does not live up to its reputation at all – and that is its strength.

The show still has about as much sexual, physical, racial and topical humor as you can fit into two hours of musical theatre – but it isn’t rammed into the audiences face, and the reason this production is successful all over the world is evident in the first 20 minutes.

Above all Avenue Q is an everyday story, which audiences can relate to. It is the tale of a young university graduate, trying to find his purpose in the world, and his encounters with financial instability, unemployment, friendship, lust and love. It’s a story about doing the right thing, by others and by yourself – but above all caring about how what you do and say impacts the world around you.

The set is a typical street in Alphabet City, a downtrodden artist “village” which exists in real life in New York. The genre for this tale is Sesame Street meets The Muppets. Through puppetry and live action we take a ride with the characters of Avenue Q, and hopefully learn something of ourselves along the way.

Set design by Richard Roberts looks amazing and is equally versatile, with rotating walls to show both inside and out, an overhead advertising billboard for projections, and multiple levels to lift the action up off of the stage and provide entrances for the puppets.

The puppeteering is very impressive and the actors have really made the puppets an extension of their own emotions, demonstrating feeling and characterisation on their own faces and dancing and singing as if they were one.

All of the performances were faultless and the outstanding cast made up of Mitchell Butel, Natalie Alexopoulos, Luke Joslin, Cherine Peck, David James, Christina O’Neill, Josie Lane, Gus Murray, Frank Hansen and Leah Howard should all be congratulated for creating an outstanding ensemble, where no part was too small.

Butel, Alexopoulos and Joslin deserve particular congratulation for their ability to maintain characterisation of multiple puppets, switching back and forth between voices, and even singing songs as two different characters at the same time.

Overall this is a remarkable piece of theatre which will appeal to the masses, young and old, and as it does will spread its message to the people with an injection of humor, colour and vitality.