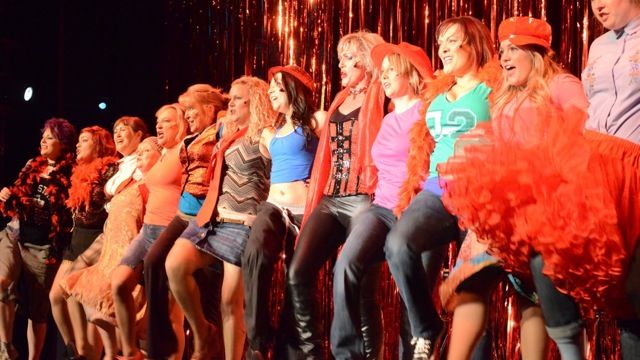 Bad Girls the Musical is not bad at all, but great and thoroughly entertaining.

In the wake of Urinetown, Devonport Choral Society, and Director Sid Sidebottom, has delivered us another musical that many of us may not have heard of before. One should not let that hold them back.

Bad Girls is based on the U.K. hit cult-television drama series of the same name, set in a fictional women’s prison.

Like a good television drama, Bad Girls’ strength is in the quality of its characters, who at times show great levels of warmth, compassion and above all good-old fashioned British humour. Despite being advertised as for ‘mature audiences only’, the fantasy, humour, song and dance mask a lot of the truthfulness of prison life – which is constantly there underneath it all – like Glee, but swap high school for prison. There is a nice balance of lighthearted humour while still tackling strong adult themes.

Sally Jupp as the hardened ‘boss about town’ inmate is a standout, along with Denise Sam who plays the ‘unflappable ganster’s wife’ Yvonne Atkins. However it must be said that at times, the delightfully dotty, Noreen Biggs, played by Lynda Derrico, steals the show.

Unlike other female prison musicals that come to mind, Bad Girls is less about one character’s journey and more an exposé of the difficult issue of first-world punishment­ – incarceration versus rehabilitation.

David Lee as the ‘old school screw’ Jim Fenner is rightfully menacing and at times appropriately callus. He and his sidekick Sylvia Hollamby, played by Maree Brodzinski, carry the story. It is their relationship with the inmates and the University educated, new-thinking, wing governess Helen Stewart, played by Alison Jarman, that ultimately leads to the climax. The musical numbers are catchy and at times evocative. The big all cast musical numbers are beautifully harmonised, and showcases the strong singing talent we have on the coast. Katy Pakinga, Holly Johnstone and Carolyn Harris are vocal highlights alongside Sam and Sally.

Bad Girls' content makes the production strangely intriguing, however because of the individual, strong characters it is also thoroughly enjoyable.

The Devonport Choral Society’s production of Bad Girls the Musical is the Australian premiere and they have certainly produced a polished piece to be proud of.

Geoff is a freelance reviewer. A published playwright, he holds a Masters Degree in theatre from the University of Tasmania. He has worked as a freelance director with various Tasmanian theatre companies including CentrStage and the Ulverstone Repertory Theatre Society. He has worked with numerous companies including Mudlark Inc., Three River Theatre, Launceston Musical Society and Devonport Repertory Theatre Society.