The Ballad of the Plague Doctor 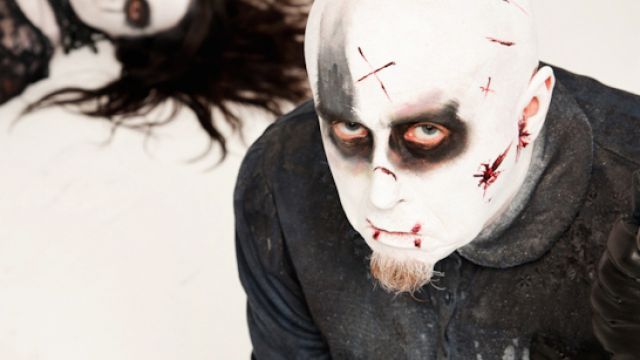 The Ballad of the Plague Doctor is an odd beast (I use that last word very deliberately). It’s a piece of spoken-word storytelling, delivered by an onstage narrator who is hideously made up with pallid skin, dark circled eyes and pockmarked face, garbed in a black smock. He intones, declaims, mutters, caresses, shrieks and otherwise twists and turns the passages of his narrative using all of his considerable theatrical prowess, accompanied by the small stage’s only other occupant, a grim gothic figure, pale of brow and black of lip who sits at a keyboard and plays out a continual musical underscore to his grim tale.

The story itself is that of a character named Marrok Corvus Rapere, a psychopathic serial killer in 14th century London who, after dispatching his vile parents in particularly gruesome manner, proceeds to operate under cover of the role of a ‘plague doctor’, concealing his murders beneath the guise of attending to victims of the black death.

Rapere is occasionally embodied by our narrator, the unlikely named Alphonse Cheese-Probert, so we the audience can see firsthand his tormented state of mind. At one point it seems this is going to become a tale of redemption, but it’s not to be. Instead it is simply the old horror story of descent into dyonisian madness, of being doomed from birth, a gloomy old subject indeed.

To the entirely appropriate music of Lady Sophronia Lick-Penny (yes, I got that right), Mr Cheese-Probert recounts Rapere’s abominations in visceral detail, leaving no obscenity undescribed in full. Faces are skinned, skulls are smashed into mantelpieces, cerebro-spinal fluid is sent flying to the ceiling, and hearts are stilled by the simple expedient of ramming a hand down the victim’s throat, dislocating their jaw, finding the offending organ pumping deep within the body and crushing it to a pulp. And all this is lovingly described in elegantly evocative language.

Clearly, it’s not for everyone. But those who love the work of modern gothic horror writers may well find this an engaging experience. Certainly Mr Cheese-Probert held the attention of the audience for the full ninety minutes, and told a compelling, if harrowing, tale. Time flies when you’re having fun.