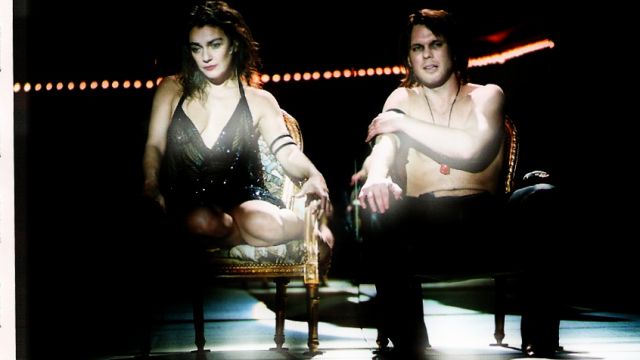 Sydney audiences currently have the opportunity to see Barrie Kosky’s Vienna’s Schauspielhaus production of Poppea which is playing a three week season at the Drama Theatre, Sydney Opera House.

Kosky’s production of Poppea is a radical new interpretation of the mid 17th century opera, The Coronation of Poppea, with music by Claudio Monteverdi and storyline by Giovanni Francesco Busenello. Monteverdi’s opera, described as ‘the most savagely cynical of operatic masterpieces’, is set in ancient Rome around the mid first century. The opera starts with two goddesses, Virtu and Fortuna, arguing, each claiming to be a more important goddess. Both yield to Amore, who vows to prove her superiority with the love story of Emperor Nero and his flame, Poppea.

Poppea is presented by six performers on a stunning set, accompanied, in the ‘pit’ by a wonderful ensemble of four musicians led by Kosky’s passionate and dynamic piano playing. Kosky has revamped the opera, translating it from Italian to German, and interspersed through the opera are a large collection of Cole Porter songs. Kosky’s quirky choice of Porter love songs works well. Sometimes the songs fit in humorously, other times poignantly.

Kosky wins great performances from his strong cast. The acting and the singing were exemplary. My pick of the cast: Barbara Spitz was fantastic as the formidable Amore, in what amounted to be a narrator’s role. Melita Jurisic was great as the sexy, manipulative Poppea, as was Beatrice Frey as the devastated dethroned empress Ottavio, and Ruth Brauer-Kvam as the passionate Drusilla, still holding a flame for Ottone.

Like the Bard’s War of the Roses, Poppea is another story about the eternal struggle to wear the crown.