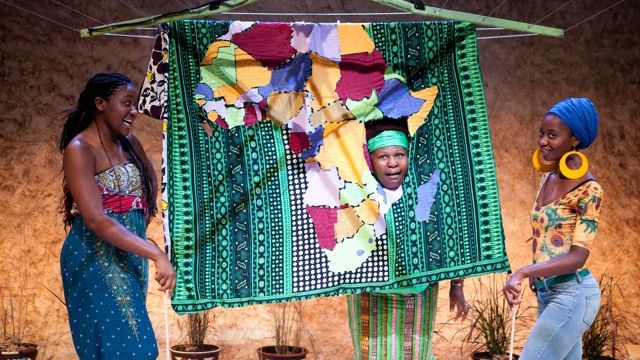 Conceived and led by Ros Horin. A co-production between Racing Pulse Productions, Riverside and Belvoir in association with NSW Service for the rehabilitation and treatment of refugees (STARTTS). Lennox Theatre, Riverside - 9 May to 18, 2013 & Downstairs Theatre, Belvoir - 15 August to 8 September, 2013.

This important piece of verbatim theatre needs to be seen and lauded for many reasons. There’s the sheer courage of the women who have been prepared to share their stories. There’s the intricate way Ros Horin has woven those stories into an extraordinary piece of theatre. There’s the vitality and enthusiasm of the performers. But mostly there’s the way this production is able to tell, in a way that is so open and honest and amazingly compelling, of how violence against women – rape, sexual torture, forcible impregnation– has been, and is still, used as a weapon of war.

Horin has brought her vast theatrical experience and sensitive understanding of the plight of others into the development of this production, which has been three years in the making. That she has been able to bring together so much support from both theatre practitioners and community bases – Amnesty International, Australia Council for the Arts, Arts NSW, African Women Australia, The White Ribbon Foundation, to name a few – underlines the importance of this work. The fact that it is also being developed into a documentary film about the women and their journey of healing and transformation, means that Horin’s commitment to them and their message will reach an even wider audience.

Don’t get me wrong! It’s not heavy-handed. It’s not didactic. It’s not preaching. It’s story-telling of the most beguiling kind. The four women, who were not performers until they began on this journey, are joined by professional actors, dancers and musicians. Together they take the audience to their Africa, to its beauty and music and movement – as well as its horrors.

Very personal direct testimony, simply and sometimes heart-breakingly expressed, is interspersed with a variety of theatrical devices that are used to take the burden of personal hurt and tragedy away from the storyteller. They ask others to tell their story for them; or take on their role in a question and answer scene. Photographs appear on makeshift screens and startling videos depict war and gunfire. Aminata Doumbia’s beautiful voice introduces some scenes and eerily echoes others. And mixed gently into this are less bitter memories. Effie Nkrumah dances her way through the map of Africa, from the stamping and drums of South Africa to the swaying shoulders and arms of the more northern countries. They all remember the markets in a short but happy, noisy, thoroughly African segment.

There are moments when inexperience and opening night nerves cause some tiny glitches in pace and timing, but there is a cohesion of support and understanding that is not often seen in professional theatre; a give-and-take based on the mutual experience of shame and loss that is tempered by a mutual love of movement and song and poetry. So much is expressed in so many different ways. A few short sentences vividly bring to life Rosemary Kariuki-Fye’s early, confused childhood in Kenya. Yordanos Haile-Michael’s sad eyes say as much as any words of her systematic rape as a child soldier in Eretria. Yarrie Bangura’s energetic rapping of the poetry she writes tells the world that women must talk up, and men must listen!

There are hard hitting moments in this production. It does not attempt to soften any of the effects of the violence these women have experienced, or the fact that this sort of trauma continues daily across the world. That message is vivid and clear and precise. How it is presented, and the strength and love and hope that emerges from each story and every performer, is what makes this production very important – to the women themselves, to others who have similar stories but have neither the strength nor opportunity to share them … and to the world, that continues to turn a blind eye to such suffering and violence.

The production moves from Parramatta to the Downstairs Theatre, Belvoir on 15th August, giving both the west and east a chance to meet! If the standing ovation from the full house on opening night is anything to go by, Ros Horin and the Baulkham Hills African ladies are on their way to a hit season.