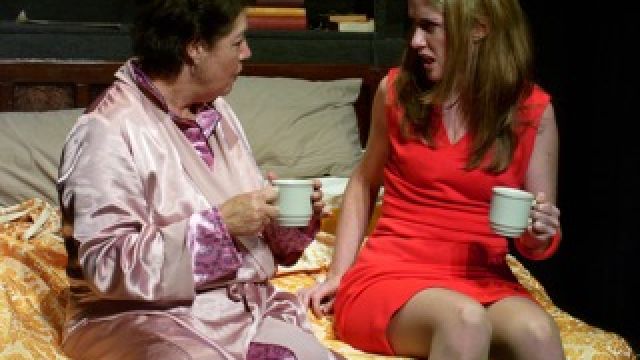 This jolly farce written in 1975 by British playwright Alan Ayckbourn follows four married couples over one long night and the intertwining machinations of their interconnected relationships. This production opens with three ready-made beds onstage and shows three of the four couples getting ready for the evening's events. The catalyst that sets up the play for the entirety of the following chain of events is when Susannah, Trevor's wife, springs him passionately kissing his ex girlfriend, Jan. The play then spins into a tornado of frazzled women, tense men, phone calls in the night, confessions, arguments and fights.
The stand-out performances were middle-aged married couple Delia and Ernest played by Jeanie Drynan and John Turnbull respectively. They provide a good foil and mediation between the frantic happenings of the younger couples. Another mention is Adam Cleland who plays Malcolm and delivers a well-developed, tense 'Cleese-ian' type performance which is hilarious.
The play centers on the shaky marriage of Trevor and Susannah. Megan Alston plays the neurotic Susannah who finds herself repeating self-help phrases out loud about confidence while her odd husband Trevor makes social faux pas everywhere he goes, from kissing his ex-girlfriend to turning up at people's places unexpectedly in the middle of the night. The other couples deliver the humor, bounce-off and relevant tension needed to support the chain of events that unfold.
The second half of this play builds interesting momentum only to become a bit of a repetitious cycle, script-wise. The characters don't change or resolve anything – Susannah is still as neurotic at the end as she was at the beginning, the character Nick who has a bad back and winces in pain, is still wincing at the end and Trevor is still the bumbling, bearded young man we were introduced to in the beginning. This is no doubt a reflection of the fact that the play is very 'of its time' and when viewed within that paradigm, offers an entertaining night of theatre.
Presented by Stella Green Productions, this performance was professional and well delivered; there was the odd dropped line. Interestingly, half of the actors are Ensemble Theatre graduates and performed together in Angry Young Women in Low-Rise Jeans with High Class Issues, which had nothing on the professionalism and quality of this production of Bedroom Farce.
Emma Bell