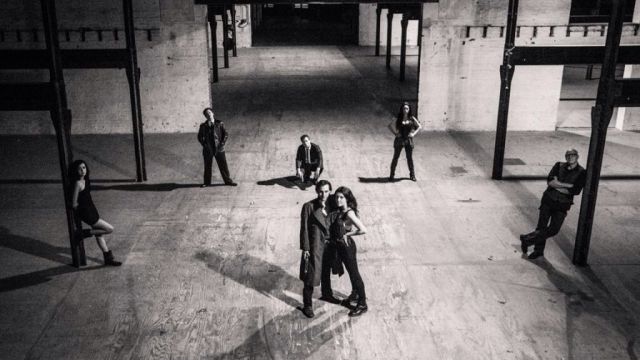 Below Babylon, a new play from Bitten By Productions, is a piece that’s full of potential. Set in a dystopian world of gun-wielding “enforcers”, it concerns Lincoln, a former member of this mysterious profession, who’s waiting for his past to catch up with him, ie for his nemesis to track him down and finish him off.

The action all takes place in a bar run by Harry, who’s struggling to make ends meet (and no wonder, considering he never asks any of his customers to pay for their drinks) and who finds himself getting more and more involved in an escalating series of events, inevitably leading to the mayhem of a final shootout.

Some of the characters, particularly Lincoln and his enemy Reagan, are evocative of film noir and western archetypes – the lone gunslinger, the hunted man – with the ongoing references to a world of enforcers adding an element of sci-fi.

While the script certainly contains some nice character moments, it could also benefit from a bit of tightening up, particularly in paring back of exposition-heavy scenes. It also seemed as though the cast, clearly all hard-working and dedicated performers, would have benefited from a longer rehearsal period. Justin Anderson seemed miscast in the challenging role of Lincoln, a man whose casual approach to violence would likely evoke a constant undertone of menace. Hamish Buchanan’s performance as Mac needed toning down, as it was played at a melodramatic pitch higher than that of the accompanying cast. The decision for Steve Young to play Reagan as extremely unhinged required displays of histrionics which ran the risk of enuring the audience to the character’s threat. Melissa Howard as Chloe and Dhania McKechnie as Clara were impressive, while Christopher Grant as Harry, despite having trouble with the rhythm of his character’s dialogue, nevertheless had a couple of strong emotional moments which worked well.

Given the opportunity for further time and work, Below Babylon could realise greater potential from its script and performers. But even as it stands, fans of the noir and thriller genres may well find it an entertaining and arresting play.