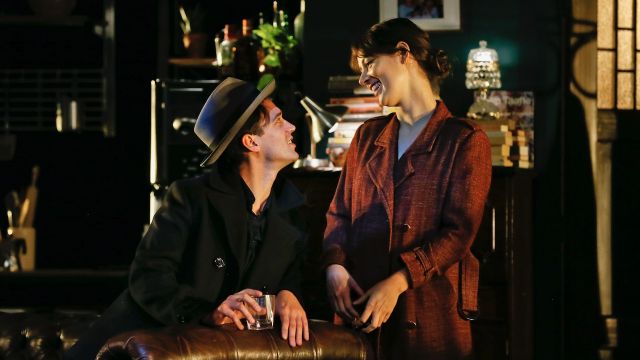 Tom, an Australian visitor to Berlin, has chatted up Charlotte, a bartender in a ‘real Berlin’ bar, claiming he has no hotel.  She invites him to sleep on her couch.  Her apartment is comfortably furnished and lived in.  (Design by Christine Smith.)  Charlotte confesses to being an heiress.  There’s a Constable painting on the wall in her loft bedroom, but she says it’s only a reproduction.

An undercurrent of tension builds as Joanna Murray-Smitch catches the awkward, feeling-each-other-out, semi-flirtatious chat of two attractive young people who were strangers two hours ago, one of whom is speaking her second language.  Tom (Michael Wahr) offers implausible but playful explanations for why and how he is in Berlin.  Charlotte (Grace Cummings) plays along – but she’s a tough, worldly-wise Berliner who’ll only take so much crap…  He is sweet and boyish; she is curious and an entertaining foil for his attempts at charm.  Ms Murray-Smith give us the clash between a blunt, opinionated, and argumentative European and a ‘jokey’ conflict avoiding Australian – and director Iain Sinclair gives a nervously restless mode to Tom and calm if evasive wanderings upstage for Charlotte.  These preliminaries, however, feel rather too much like preliminaries and go on too long.  It’s almost as if we are waiting for the play to really start. It’s difficult to write about this play without ‘spoilers’, but this opening section also plants little time bombs that will go off just when needed.  Tom irritably refers to Japanese girls taking selfies at the Holocaust Memorial.  He innocently asks about the ‘stumble stones’ he can see in the street below.  When it emerges that Tom is, in fact, a Jew, and Charlotte covers by making a joke of it, we trip over into the meat of the play.  As Ms Murray-Smith says, ‘it’s a small play about big ideas.’

The question is how do a contemporary young German and a contemporary young Jewish Australian think about – and live with – the past?  And in a city where the signs of and the monuments to the Holocaust are omnipresent?  The debate between them is spirited, sometimes tactfully prickly, sometimes harshly blunt, and it builds the tension further because we are torn between ‘he’s right’ and ‘but she’s right too’.  Charlotte is no Nazi hangover: she knows what happened.  How could she not? Much seems to hinge on the issues of fate, guilt, and responsibility: both characters lost people in car accidents when each was present.  Here, at least for me, the connection is logically tenuous and just a little puzzling as Tom becomes a tough interrogator and pushes hard on ‘what if…?’  What if that car driver had not been speeding?  What if the road had not been wet?  The decision to make these analogies seems to me curious even if there is a strong sense here of permanent grief for both and it’s clear that guilt for both lies behind these questions – but whose guilt and for what?  And if someone is ‘responsible’, then what of reparation?

It’s not a spoiler to say that despite their debates, Charlotte and Tom do fall in love – or give way to the enormous attraction they feel for each other – because it’s in the prepublicity and it’s what we expect.  They sleep together, but in the ‘cold light of day’ (beautifully rendered in Niklas Pajanti’s lighting), there’s a further development.  When Tom, joking-but-not-joking, almost begs Charlotte that they run away together, right that minute, to… Samoa… or anywhere, it seems a crazy romantic flight of fancy, but later we will realise he was serious and for good reason. Ms Cummings gives us a fine, nuanced performance.  Anyone who knows a young Berliner of a certain class will recognise Charlotte – in the accent (consistently maintained), the posture, the gestures.  Charlotte’s aggression-as-defence front crumbles touchingly, but her character’s fierce arguments for how she lives with the Nazi past are compelling because of the near desperate passion with which Ms Cummings delivers them.  What she says is complex and original - and it is what gives this play its distinction from others in similar territory.  There’s a sense that Ms Murray-Smith has thought hard about this very real dilemma - and what Charlotte says may be the playwright’s central achievement here.

Mr Wahr, with no accent to worry about, has nevertheless rather the tougher time of it.  He has to make us believe in his character and then, when that character is revealed as something else, giving us a decidedly queasy dismay, have us still believe.  I think we do.  It is as if something Charlotte says triggers a reminder of the past and flicks a switch.  As it is for the actor, so this reveal is a challenge for Mr Sinclair.  His intuitive staging here catches in movement Charlotte’s shock and Tom’s dominant agenda. When the characteristic Murray-Smith twist comes in this late reveal, it throws almost all we have seen and understood – including the characters’ love for each other – into new jolting perspective.  Some may say that it is, given what we’ve seen and thought we understood, implausible, but it demonstrates powerfully how a steely purpose out of the past can negate other real and tender and good emotions in the present.  And then, as we recover from that development, there is one more to come…

If Berlin is a ‘thriller’ it is definitely of the psychological type.  Whose story is it?  And whose ‘side’ are we on?  Let’s say that Tom is the protagonist, but it’s Charlotte’s story – her story of how she reacts to an unexpected encounter and what that reveals about her.  But what Ms Murray-Smith does is to take the great risk of not softening the past – while distinguishing her Charlotte from it – and in the event turning the warmth we have felt to ice.  ‘The past isn’t dead.  It’s not even past.’