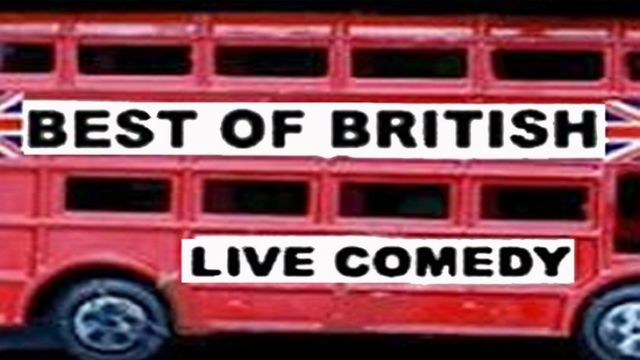 With an ever expanding programme of shows , one of the hardest decisions to make during the Melbourne International Comedy Festival  each year is where to spend your ticket dollars. Will you luck into the best show of the festival? Or will you spend an hour on uncomfortable seating with nary a laugh to be had? ‘The Best Of British’ could be the answer to your prayers. A tasting plate of comedic talents, with a rotating line-up of the  UK talent on offer this festival, if one act isn’t to your taste, just wait a few minutes and sample the next.

There’s something “right” about seeing comedy performed in an intimate room against a brick wall backdrop. Classic and not so classic UK tunes play to get you into the “Best of British” mood pre show,  and the bar is discreetly run during the show for those who feel a need to down a pint between laughs.  We’re told it’s the best value ticket at the festival, with prices ranging between fifteen and twenty five dollars, no booking fee. I would have to agree wholeheartedly.

Last night’s line-up of five UK comedians (including some ex-pats who now call Australia home)delivered a good solid hour of laughs, and nice variety. MC Dan Willis took a hard job - rev the audience up, give a little of yourself, but never make it all about you – and made it seem easy. His banter was friendly and fun, giving some good advice on “how to heckle appropriately” and he pulled the night together with ease and enough laughs to make you want to grab a ticket and check out his own show “The funny Side of A Zombie Apocalypse”.

Tom Binns – well know UK comedian– last year won Best International Act at the New Zealand International Comedy Festival. With a long list of shows, credits, radio and television appearances to his credit, it was nice to see a character comedian strut his stuff. For this outing, he was his hospital radio DJ persona Ivan Brackenbury. There were some genuine laughs, including belly ones, and some pleasant, if not occasionally predictable, schtick. His MICF show “Tom Binns has not been himself” includes this character, Psychic  Ian D Montfort and, unusually this time, Tim Binns himself. His show preceded this one in the same venue, and the laughter from within seemed to suggest he delivered both in character and out.

Scotsman Geoff Boyz – a baby faced De Niro with a Scottish accent (and by the way, his De Niro is primo) proves yet again how sympatico our Scottish friends are with Australians when it comes to humour and a general outlook on life. Boyz delivers a slick and funny take on all the things we’d expect from a Scot… from being a stranger in London to the wash up of a very big night out, with the bonus one of the best prat falls I have seen in many a year. Boyz seems like the kind of guy you’d like to have a pint, or five, with and his solo show “Inventions from a Scotsman” promises to be a fun evening between friends.  I’m definitely moved to find out.

Ian Cognito headlined the night. In his own words he is “widely regarded as the best act in his price range”. His character is a fifty five year old belligerent drunkard who rails against the world and dives into his inner curmudgeon with gusto.  He works blue (sometimes uncomfortably so) and reels from the rather expected to the entirely unpredictable and occasionally insightful. In his solo show “Trouble With Comedy” he sings and plays, although we were only treated to a moment of a good voice in this show. Despite some laughs, Ian was for me the weakest link in the show, but it was a strong line up, and if angry comedy is your thing, you may beg to differ.

Gordon Southern is a Brit turned Adelaidian who married into the Australian fold – and with that brings that terrific mix of British sensibility with a thorough understanding of Australian culture. Fast, very funny, and in command, for me he was the pick of a very good bill. With great insight he took us from Australian capital cities as women, to a Harry Potter take on AFL and beyond. The title of his solo show “Your New Favourite Comedian” may in fact be portentous. I’m keen to find out.

Use “The Best of British” as a great value night out, or as a springboard to more shows. Either way, at the price it very probably is the best value of the festival.