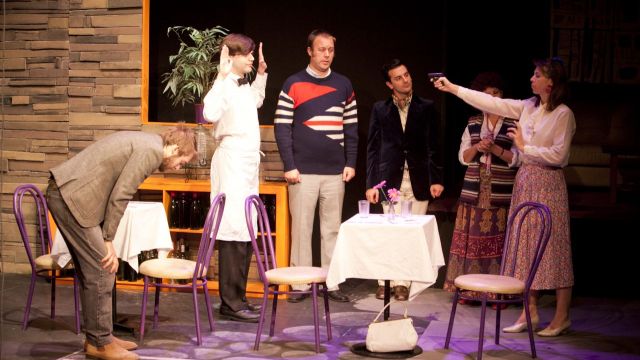 Never let it be said that 1812 Theatre doesn’t take risks. Not content to present “same old – same old” plays in their repertoire, they reach for the offbeat and unusual and challenge their stalwart audience time after time. Beyond Therapy is a case in point.

Christopher Durang wrote the play in 1981. It concerns two Manhattanites, Prudence (Jacqui Stewart) and Bruce (Jacob Pilkington) who meet on a blind date, desperate to find a stable relationship as their body clocks are ticking. The stumbling block is that Bruce is bisexual, with a live-in lover (Bob, played with verve and great comic timing by newcomer Robert Ruscitti, a name to look out for) and he and Prudence are in therapy with different psychologists. Prudence visits the narcissistic and disturbed Stuart (David Coonan – another newcomer) and Bruce puts his mental well being in the hands of the flamboyant and crazy Charlotte (Sarah Comers) who likes to reference Equus and sees merit in poking out horses’ eyes as a way of living passionately. How Prudence and Bruce find their way through this minefield to a permanent (?) relationship is the basis for the comedy. The problem is that it’s not a very good – or funny – play, through no fault of the cast or director. It ran only 3 weeks on Broadway, yet has become a stalwart of community theatre, despite its language and the confronting issue of bi-sexuality. 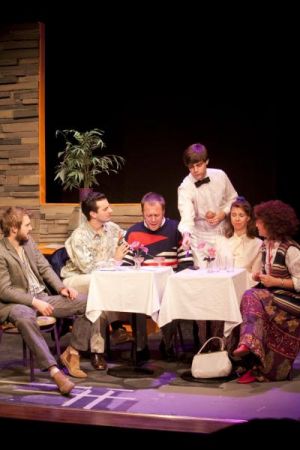 1812 and experienced director John Mills do a sterling job with a largely inexperienced cast, but it’s the more experienced ladies who shine on this occasion. Jacqui Stewart is a delight to watch; giving a beautifully rounded and totally convincing performance. She makes Prudence a warm and sympathetic character when the writing suggests she could be annoying. Sarah Somers is an award winning actress and it shows. Though her first scene swamped the text, she pulled it back in Act Two and gave us a deliciously eccentric menopausal matron in hippie gear in Charlotte, who can’t remember the correct words for things (EG…patients become porpoises and so on). It’s a laboured gag but Somers makes it work, and she adds a wonderfully zany ingredient to the overall mix. Jacob Pilkington is impressive as Bruce, the sensitive bi-sexual who cries over everything, but David Coonan seems far too young as Stuart, though I’d really like to see him in something else. He has an attractive presence. Matthew Chaloupka-Wagner makes all that he can of the small role as the waiter.

The set (designed by Chris Procter and John Mills) is very impressive, as all 1812 sets are; but in this case the layout worked against the pace of the show. The office requires a complete change for each psychologist, and this means 30 second blackouts on half a dozen occasions, causing a lack of momentum. It might have been better to have had 2 small office areas, one on either side of the stage, with the restaurant down stage front, below the apartment rostrum.

It also would help if 1812 gave more detail in the programme blurbs. The audience was confused as to the period and style, and took longer than necessary to connect to the action… all it needs is The early 80s – Manhattan to set the scene for us.

Though this wasn’t the company’s greatest offering it was still an enjoyable night out, well worth the long drive, and the sumptuous champagne supper that 1812 provides after every show is always a welcome extra.