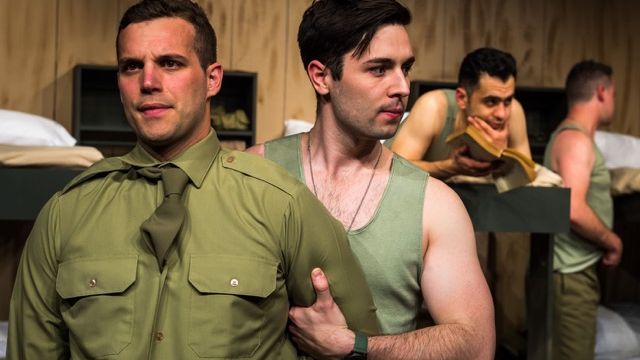 When he died last year, Neil Simon left a legacy of 49 plays, many of which he adapted for the screen. Funny, heart-warming, just a little flawed, his characters and their stories were a perceptive insight into Twentieth Century America – and won him more Tony and Oscar nominations than any other writer. His plays have been called “painful comedies” because of Simon’s ability to find something funny in serious situations.

Biloxi Bluesis no exception. First performed in 1984, it is the second play in The Eugene Trilogy, three semi-autobiographical plays about growing up in a Jewish family in New York in the 1930s and 40s.

Biloxi Bluessees Simon’s young ‘alter ego’ – Eugene Morris Jerome– conscripted into the US Army and on his way south to Biloxi, Mississippi for basic training. There, along with five other rookies, he faces the discipline of hard-talking, hard-drinking platoon leader Sergeant Merwin J. Toomey.

The play is demanding in many ways. The set requires a railway carriage, the army barracks, a mess hall, latrines, a brothel, a U.S.O. dance hall and a park. Yet director-cum-Commanding Officer Meredith Jacobs, with her army architect, Trevor Chaise, and a trusty battalion of non-commissioned theatre tradies have recreated a 1943 American army barracks, complete with bunks, wash stands and running water! 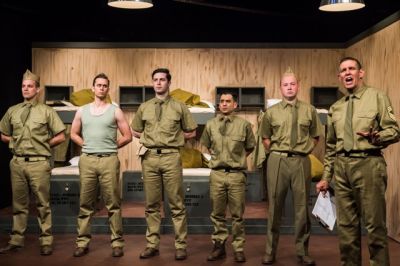 Authenticity is crucial in a play such as this. Accents. Uniforms. Both have to be right. The multiple push ups demanded by the script means fitness is imperative. The individual complexities and eccentricities of the characters require careful analysis and direction. The dialogue must run as seamlessly as the scene changes.

Jacobs has been meticulous in ‘commanding’ all of this. She and her cast have taken the time and commitment to make Simon’s characters, and their relationships, believable – then added the energy, tempo and “Ho” that marches the play on to the parade ground in uniforms requisitioned by Annette Snars, PT store officer-in-charge.

Julian Floriano is engagingly naïve as Eugene M. Jerome – soldier and story teller – who artlessly takes the audience into his confidence between scenes, whether to describe his fellow soldiers, or share the thoughts and aspirations that he is recording in his memoirs. Floriano gives Eugene the innocent optimism and belief in others that is key to all of Neil Simon’s work.

Agustin Lamas plays the gentle and intelligent Arnold Epstein, caught in a struggle of minds with middle-aged, battle scarred Sergeant Toomey. Lamas finds the inner strength and self-belief that drives Epstein in a moving performance. 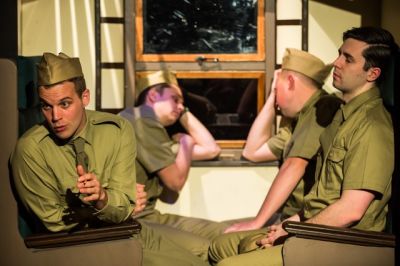 Jason Spindlow and Chris Butel face off against each other as Wykowski and Selridge, competitive, brash, boastful, each is a sharp contrast to the thoughtful Eugene and perceptive Epstein. Both actors sustain the lively macho energy and aggression that bubbles through their roles.

Chris Lundie whips this diverse squad into shape as gruff, confrontational – but flawed – Sergeant Toomey, who takes no nonsense, and gives no quarter, especially to Epstein, whom he harasses unmercifully.

In Act Two we meet Rowena (Michelle Murphy) and Daisy Hannigan (Kate Gandy), who bring a different dimension to Eugene’s life. Simon created his female characters with a respect and perception unusual for male playwrights of his time, and though these women appear briefly, Murphy and Gandy find the gentleness and sensitive strength that Simon infused into their characters. 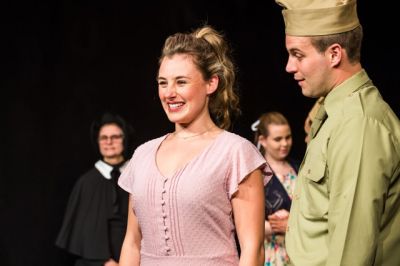 The play is marshalled by the carefully drilled, camouflage-clad crew who move trucks, pull curtains, lower lights – and a moon – to the parade ground beat created by composer Joshua McNulty and recorded by Bernard Teuben. Lighting engineer James Winters highlights the changing moods.

Biloxi Bluesis fast, funny – and serious. It recreates the mixture of apprehension, excitement and rivalry of young recruits and conscripts going off to war – and the officers who had to train them. It does so with understanding, compassion … and laughter. Meredith Jacobs and her cast and crew have made it a poignant tribute to a playwright who is sadly missed.