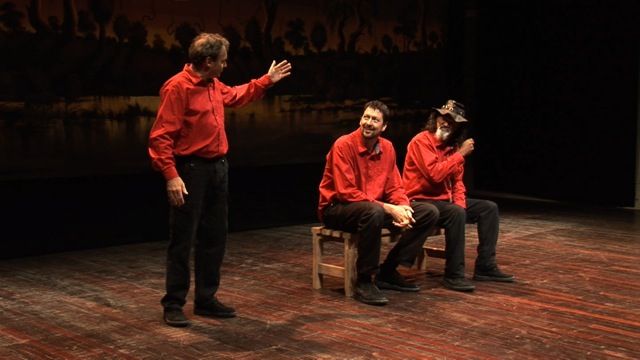 Bindjareb Pinjarrai s the very essence of a stunning touring show.  It is particularly accessible because of its down to earth ‘boysey’ humour and totally worth catching for a number of reasons I hope I make clear in the following.

Part of its very considerable charm is that in relation to contemporary race relations in Australia it walks an excruciatingly fine line, between both the potentially sanctimonious and the awkwardly self-effacingly, politically incorrect with surprising and uplifting success.  It never becomes ‘cringe worthy’!

It is a vital, engaging, partly improvised and often very funny, highly tuned physical theatre piece that borders on Theatre In Education.  I would like to say it is also timely.  However truthfully it is way over due and would have been timely if it had been brought to us ten years ago when it was first conceived.  But, better late than never! 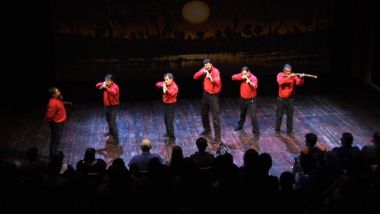 Bindjareb Pinjarra explores black/white relations in south-west Western Australia, with a focus on the early days of settlement and it culminates in the retelling of the Massacre at Pinjarra that was lead by Governor James Stirling in 1834.

However, on another level, it is the story of how some white blokes and some Noongar blokes have taken on the mission of sharing shameful and baffling truths from violent pasts that  - hidden in a kind of half-life - are haunting us.  In doing this, they have made, some sense of it all, by liberating knowledge and sharing it with audiences and ancestral spirits alike.  It contains a wonderful haunting, mystical element, that is reinforced, not only by an exquisitely painted and beautifully lit backdrop, a live and recorded soundscape that doesn’t miss a beat, but also, with a concluding question and answer session.

As a piece that does not have a single writer or a director it is a testament to what can be achieved by a group of talented dedicated men, with lashings of integrity and purpose, working and creating together.