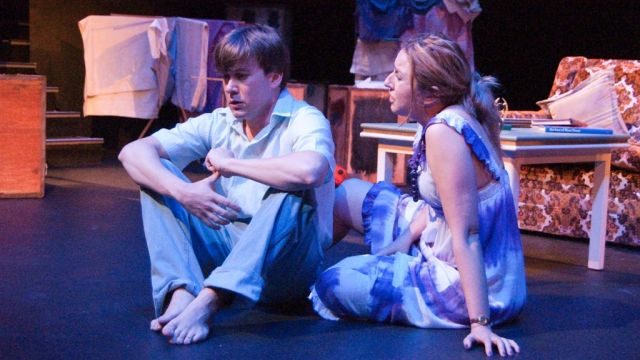 Author Sven Swenson’s reputation took off publicly last year with his ‘big’ play The Truth about Kookaburras. The theme of that murder-mystery was ‘What constitutes masculinity’?
In this work, he explores the power of motherly love. As a secondary theme, he challenges the freedoms the WW2 diggers fought to defend, given the number of family values they held dear that were shattered in the ensuing decades. (Daughter of a victim of the Burma railway, Rose, exemplifies many of these in her tearaway character.)
Swenson sets the action during Brisbane’s massive 1974 flood. He captures it almost photo-journalistically: Grandmother Ruby struggles with the help of her grandson, Kevin, abandoned as a baby, to gather together everything too precious to lose as the waters rise. In their impoverished state they have nowhere to go but onto the roof.
Totally unexpected is the arrival of a drenched Rose, mother of Kevin. As events develop she reveals that her own mother, Ruby, was so obsessed by her love of her husband who died in the war that she was unable to show real love for her daughter. Rose, lacking love from neither a father nor a mother, rebelled, ran wild morally, and had a boy whose paternity remains very much in doubt.
This précis of the dense but thoroughly engaging complex family saga hardly does justice to Swenson’s plot. It’s a play impossible to walk away from – like Shakespeare, Swenson hits us right where we live, so his situations resonate long after we leave the theatre. He’s captured Brisbane life in the early Seventies for posterity.
Just three talented actors breathe life into the characters: Louise Brehmer (Rose), Dash Kruck (Kevin, her 15 y.o. son) and Kaye Stevenson (Ruby). What a challenge, what a fraught emotional journey he demands of each of them! Swenson’s faith (as director) in his choice of actors was vindicated.
What an introduction to La Boite’s inspirational Indie programme! They found a way to adapt their ‘round’ into a ‘black box’ space seating round a hundred for tryout seasons of potential popular successes.
This one deserves a 2011 run by a major company.
Jay McKee