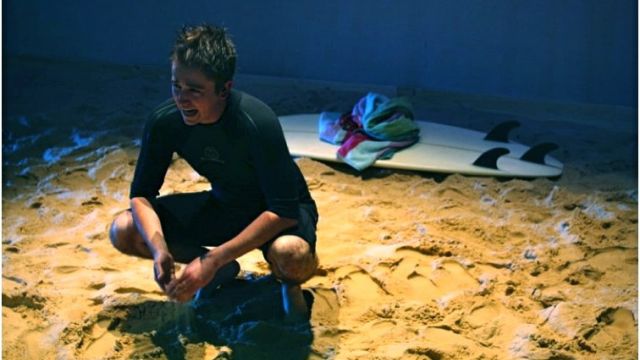 ASTUTE handling by director Brendan O’Connell turned a flawed play about the impact of a violent crime on a close-knit community into an engrossing and moving experience.
Blackrock was a 1995 “adult” rewrite by Nick Enright of A Property of the Clan, commissioned from him four years earlier by Newcastle’s Freewheels Company as a work for high school audiences. Both plays look at the issues that were raised by the rape and murder of a 14-year-old girl after a Newcastle area beach party.
A Property of the Clan is a tighter and more focused play than Blackrock, with the adult characters that have been added to the latter’s story not particularly convincing. But this production worked for me, largely because O’Connell gave the tale a more leisurely pace.
The stage was covered with sand and the characters often came to this beach to reflect on what was happening in their lives. Previous productions I have seen have rushed through the text in 90 minutes. This was almost 30 minutes longer, and the pauses in conversations and silences of solitary figures revealed a lot about the state of mind of teenagers and parents alike.
The cast was also the best I have seen in the play.
Dean Blackford made agonisingly real the demons that plague 17-year-old Jared, after seeing mates at a party sexually assaulting a girl later found dead. He can’t connect with single mother Diane (a down-to-earth Karen Lantry), who has her own communication problems as a result of a breast-cancer diagnosis, he breaks up with supportive girlfriend Rachel (Rachel Jackett), who is a member of a well-to-do family on the other side of the harbour, and his blokey relationship with long-time best mate Ricko (a charismatically dangerous figure in Ben Freeman’s performance) has hit jagged rocks in the wake of the disastrous night.
Ken Longworth