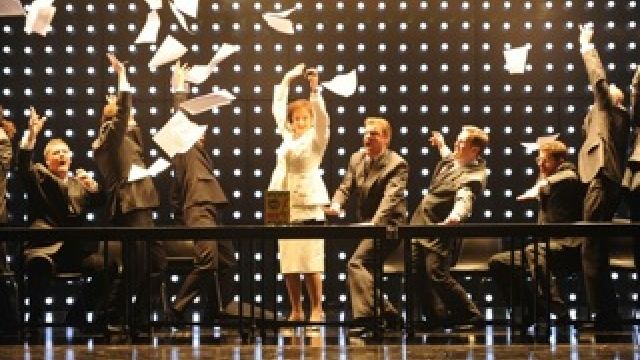 A brand-new home-grown opera in a $2 million production at the Sydney Opera House is something to celebrate. Brilliantly set and directed, and with a stand-out central performance, Bliss is certain to make its mark on international stages in the coming years. Bravo, Opera Australia.

Though it’s not exactly a crowd pleaser. Brett Dean’s intense music is packed with complex, dissonant chords with hardly a hint of melody. Amanda Holden’s text has nicely simplified Peter Carey’s first novel, a postmodern journey through some bleak byways of early 80s sex, drugs and advertising agencies - but the drama doesn’t grip. It remains a sequence of unlikely events rather than a plot.

Director Neil Armfield brings considerable finesse to the task. The pace is cracking; his excellent large cast moves confidently on a simple revolve and through plenty of doors in a three-sided box. But what a box!

The walls contain hundreds of LED bulbs, each one able to display as many colours as a TV screen pixel and all thrillingly under the control of Chris Twyman’s computer. This means that anything is possible – surreal colour washes, moving text, wandering elephants, beautifully convincing cityscapes. When the fable falters, the outstanding setting keeps you in thrall.

The production revels in its Aussieness. Accents have been encouraged and it’s pleasantly jolting to hear sung such phrases as ‘you drongo, you dill’, ‘stick ‘em up your arse’, and the memorable ‘a f…ing elephant sat on my f…ing car’. Surtitles are supplied for audience members who can’t quite believe their ears.

Dressed in white, Peter Coleman-Wright creates the demanding central role of Harry Joy, the advertising executive who, recovering from a near-fatal heart attack at an office party, finds his tawdry world spinning out of control. Coleman-Wright sings powerfully while revealing this anti-hero’s weaknesses. It’s tough on him when, after hardly leaving the stage for the first two acts, he must hand over the bulk of the third act to the story of his grabbing, greedy wife.

There are some stirring musical passages, especially the female trio with Merlyn Quaife as Betty Joy, Lorina Gore as hippy hooker Honey B, and Milijana Nikolic as the evil manager of a lunatic asylum to which Harry is unconvincingly despatched.

A large orchestra give their all. Telephones, planes and other ambient sounds are mixed with Dean’s richly layered music. Particularly happy is the trombone yackedy-yacking as the other end of one of Harry’s phone calls.