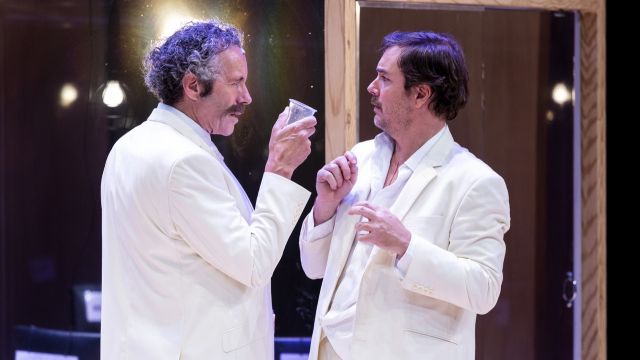 Bliss is a fascinating ‘look back’ at the heady days of abundance and hedonism in Sydney of the 1980’s through the sharp incisive writing of Peter Carey - filtered by way of the perceptions and dramaturgical skills of Tom Wright.   It is presented by an eclectic ensemble of versatile actors on a surprising set by Marg Horwell, with exceptional lighting (Paul Jackson) and sound (Stefan Gregory) and highly polished by direction by Matthew Lutton.  It is a lengthy, ambitious, keenly conceptualized and executed, hypnotic work that spans three hours including interval.

One assumes the text is pretty much completely drawn from Carey’s writing from the book of the same name, published in 1981, that won the Miles Franklin Award and the NSW Premier’s Literary Award. It flows eloquently and contains arresting imagery and marvelous smatterings of insight and indeed wisdom.

At the commencement of the performance Toby Truslove unassumingly breathes life into Carey’s words through his engaging stage presence and adroitly modulated voice. In contrast to my memory of Barry Otto’s shocked and startled Harry Joy from the 1987 film (directed by Ray Lawrence and starring Otto, Lynette Curren and Helen Jones), Truslove’s Joy seems to take the unsettling events in his stride as they unfold.

I can still hear Otto’s voice ringing in my ears and remember the film to be very lush and fecund.  By contrast, although fecundity is mentioned a number of times in this work it is set on a stark empty revolving stage with a feature of a kind of glass house.  In this way it is Carey’s language that features and the actorss characterizations that resonate with sharp clarity.

Much emphasis falls on what was the thriving world of advertising and the exorbitant amount of money, alcohol, food, drugs, sex and general decadence and debauchery that went hand in hand with this bourgeoning industry, though I think it is fair to say this decadence was experienced in many walks of life in the 1980s.  Carey seems to be identifying, with at times outrageous levity, some of the damage indulged in and perpetrated, particularly on a personal level.

Although financially the bottom fell out of the 1980’s, the relentless world of advertising is only partially losing its hold in present times.  Much of what is being examined seems to have become more pertinent and relevant today as we are belatedly trying to grapple with the concept of sustainability. The casting of this stage version of Bliss is partially ethnicity, gender and age blind, which adds to the overall charm of the flowing but rather epic story.  In fact nobody misses a beat.

As Joy’s long-suffering, but not to be suppressed, wife, Amber McMahon wows with energy commitment, vitality and vivaciousness.

Honey Barbara, a truly fascinating, strong and complex character, is richly fleshed out by Anna Samson.

Susan Prior plays a variety of roles with aplomb, flexibility, generosity and humour.

There are some issues with voice levels and actors projecting unnecessarily - as they are all wired for sound.  But hey that really is my only quibble.