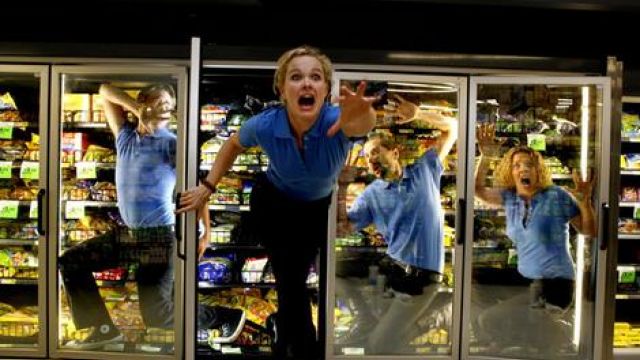 Are you in the mood to see fast paced, vibrant, highly imaginative theatre? Then Bliss, the new production downstairs at Belvoir Street, is your ticket.
Canadian playwright Olivier Choiniere's Bliss, translated by Caryl Churchill, is set in a modern supermarket. The play starts quietly, with no indication of the absolute whirlwind ahead. Four young workers are busily unpacking boxes, stocking shelves, mopping floors. Just another day in the supermarket. And then something happens to change everything. Much like a group of kids, they leave their boring, mundane tasks behind, and embark on this huge, sweeping fantasy/drama with Canadian pop music goddess, Celine Dion, in the leading role. As the play proceeds, the lines between the real and fantasy worlds become increasingly blurred.
The star of Bliss was the heat and energy generated by the cast, much more than either Choiniere's complex narrative or the play's quite familiar theme of how young people are so easily taken over by the cult of celebrity.
Shannon Murphy directed Bliss at an appropriately frenetic pace. Krew Boylan gave an outstanding performance as the fantasy ringleader and was well supported by Simon Corfield, Libby Fleming and Matt Hardie.
Justin Nardella's set vividly recreated the supermarket world with the back wall of the stage replete with supermarket shelves and filled with a choice selection of supermarket products.
B Sharp and Bareboards production of Bliss plays the intimate downstairs theatre at Belvoir Street until the 22nd November.
David Kary