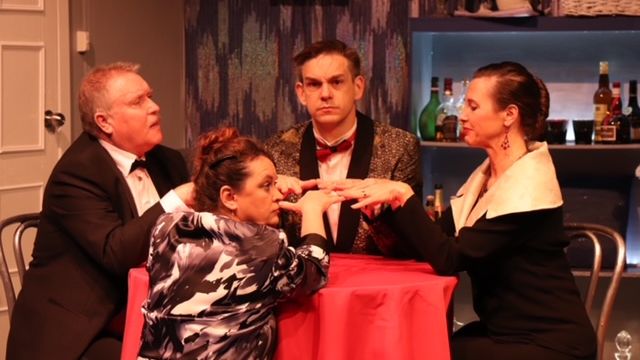 Upon taking my seat for this production, I was immediately impressed by the presentation and functionality of the set.  There are French Doors centre back and two single doors quite deep upstage on either side which both cleverly open with the doors downstage to as not to reveal any of the actors or potential paraphernalia in the wings.  The scenery is mostly blue with artistic touches of red everywhere which tie it all together nicely, creating a feeling of homeliness and warmth. Based on the set alone I was confident that this was going to be an enjoyable evening out and I was not at all disappointed.

Bernadette Miflin enters as Edith and is appropriately jumpy and a little scatterbrained.  The audience warms to her immediately.  Next on stage is Karen Pattinson, who has taken on the enormous role of Ruth.  Over the next two and a half hours Pattinson proves herself to be an excellent actor and we completely believed all of her emotional range which included being affectionate, supportive, insulted, hurt, understanding, patient and sarcastic.  Pattinson was thoroughly believable from start to finish. Then Dan Ferris enters as Charles, the protagonist, and his love for his current wife feels genuine and honest.  Sadly for her, he is also convincingly mesmerised by the apparition of his former wife, but more on her shortly.  Much like Pattinson, Ferris displays a great variety of sentiments and gallantly attempts to keep two wives happy at the expense of his own health.  His characterisation was consistent and enjoyable throughout.  More importantly, his chemistry with both of his wives is paramount to the success of this play.

When the Doctor arrives for the dinner party a new energy comes on stage in the robust and cheerful being of Michael McCrann.  He is sceptical of the dark arts and looking forward to being entertained by the promised attendance of the local clairvoyant.  McCrann has a smile that lights up the stage and the audience laughs in anticipation of what fun he is going to have with the unsuspecting dinner guest.  His wife Wioleta, warmly portrayed by Iwona Abramowicz, is conversely fascinated by the idea of communicating with the dead and is legitimately excited and open-mined about what may unfold. With this build up ahead of her it would be easy for Madame Arcati to enter the dynamic and somehow fall short of expectations.  On the contrary, Diane Howden more than rises to the challenge and owns the stage as soon as she arrives.  Her appearance is suitably Bohemian and her energy is something like a wayward firework.  One minute she runs around like a kindergarten child and the next she’s in a stupefied trance.  We honestly believe her faith in her own abilities until she eventually admits to Ferris that she, in fact, does not entirely know what she is doing.

When we finally meet the much-prophesied Elvira, the final piece of this play falls into place.  Chantel Ciano is perfectly cast as the ethereal beauty, returned from the other world to tempt her husband away from his second wife.  Ciano is very much a blithe spirit who toys with the other actors without a hint of regret or apology. This play has been very well cast, is excellently presented and is very affordably priced.  Blithe Spirit runs for another three weeks and I strongly recommend going along to see it if you can still get a ticket.