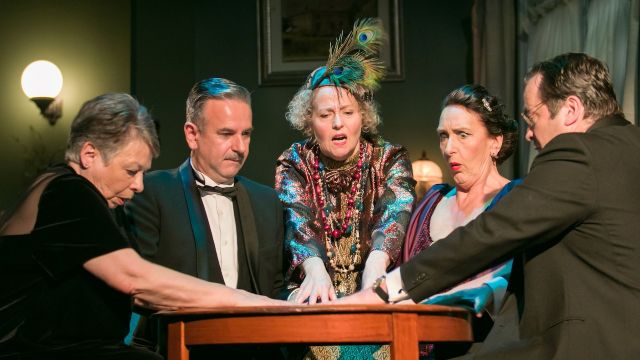 Coward’s dialogue remains as sparkling as Madame Arcati’s jewellery, 80 years after Blithe Spirit was written as a merry diversion from the woes of WW2. HRTS’s third production for the year was no tired drawing room comedy of manners. This was a fresh, intelligent, and witty reading of the text that delighted opening night audiences.

Treen French’s set was functional, beautifully dressed, and ultimately, more than meets the eye.  Lighting, visual effects, and sound effects cleverly augment the ghostly intrusions from the ‘other side’.

In a show where every element was top notch, Debra Dean’s dressmaking deserves special mention. Elvira’s costume was lovely, but Fransina Kennedy was the fashion plate for some half dozen elegant gowns.  Most enjoyable were the costumes and hats designed for Madame Arcati. Arcati’s ensembles featured vibrant colours, and unusual textures and designs which were equally quirky, classic and modern. 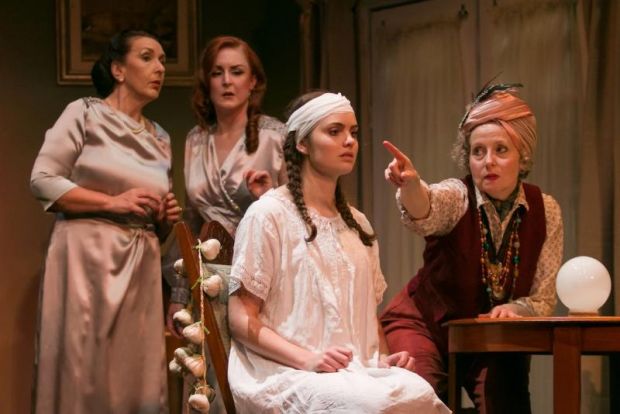 All the production elements combined to make this production a success, but the backbone of its strength was the acting.

Young Chloe Harle is to be commended on the energy and significance she gave to small part. Kath Uziallo was appropriately irritating as the posturing Elivra. Leigh Faulkner and Sandy Velini as the Bradman’s contributed to the humour of the piece in their role as observers and commentators on the action. Fransina Kennedy (Ruth Condomine) is always excellent in roles of this type and was perfectly cast with Petr Divis as Charles Condomine. Theirs was the greatest burden of dialogue which was delivered with wit and intelligence.

Sarah Phillips as Madame Arcati was a delightfully oddball. She did not portray Arcati as mysterious charlatan but rather a familiar type of recognisable crackpot. 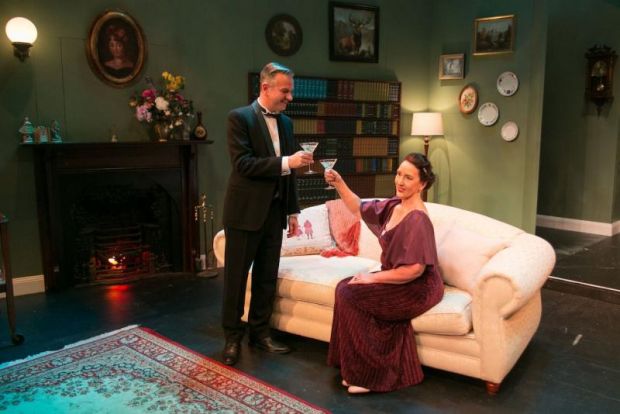 Director, Nicholas Lahey, coached this strong cast but also contributed to many other production elements as. His vision is perfectly realised.