The Blonde, the Brunette and the Vengeful Redhead 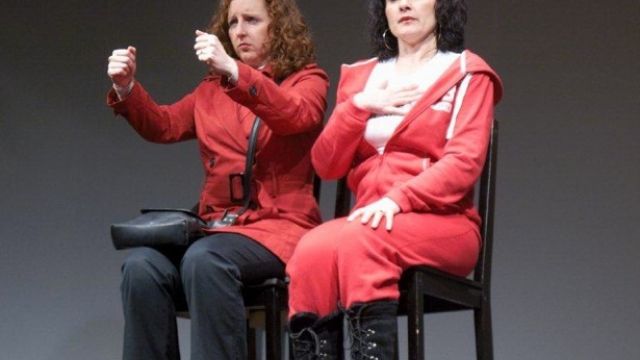 Lives are flung out of orbit in this series of inter-connected monologues (almost). The seismic cause and effect impact of a single piece of idle gossip is at the heart of the play, originally seen as a solo performance by Jacki Weaver across Australia and North America.

Resonating comedy and human tragedy are intricately woven through the play, and captured effectively in Theatre on Chester’s production.

A woman attacks and accidentally kills the blonde she mistakenly believes is her estranged husband’s mistress in a case of mistaken identity.

Paula Searle impressively delineates very different roles of the caring lesbian Doctor / partner of the victim and the opportunist Russian blonde, who may, or may not, have been the husband’s lover. Stephen Snars covers a broad range from delightfully funny to genuine pathos as a four and a half year old boy (reminiscent of Small Poppies), before returning after intermission as an unspeakably awful adult male in denial.

Sue Baxter supports effectively in a series of minor roles.

The design, simplicity itself, serves the production well. Two diagonal white walls leading to a single upstage entrance (effectively used as projection surface), small hints of red, a stage platform sloped left to right, and four timber chairs, supplemented by other simple furnishings as required. It is a world slightly askew; appropriately out of balance.

Tegan Nicholls’ sound design warrants a bow of its own, though I’m reluctant to spoil its impact with details. I have no qualms about splitting the roles of this monologue between four actors – in fact the addition of an older female actress might also be considered. However, the presence of other characters was only sometimes effective, and occasionally actually detracted a little.

Chester Street’s enjoyable, engaging production suggests a bright and varied life for The Blonde, the Brunette and the Vengeful Redhead on community theatre stages.