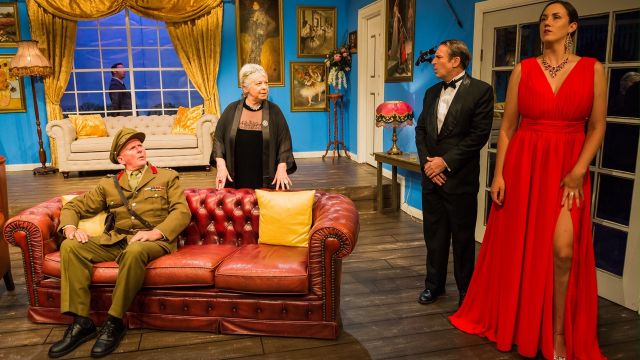 In Bloody Murder playwright Ed Sala sends up every drawing room murder mystery on stage or screen, every possible character stereotype, and every possible murderer’s modus operandi. Think Midsomer without the Barnabys, Death in Paradise without the palm trees and sunsets, Christie without Miss Marple

Set it all at a proverbial weekend party, in the proverbial parlour of a proverbial isolated manor “forty kilometres” from anywhere. Add lots of absurd twists and turns, bizarre relationship disclosures, some melodramatic deaths, and some funny lines … and you have a play that director Bernard Teuben says “has been the most fun” of the many comedies he has directed.

Teuben describes his set as growing “from a great idea I had, with new elements arriving every day” – much the same, I should imagine, as Ed Sala might describe the writing of Bloody Murder! As the play lampoons murder mysteries, so too does Teuben’s set.

Picture a full stage with high, very blue walls covered – literally – in a vast array of gilt framed prints from Pre-Raphaelite to Van Gogh to Post-Modern. Furnish it with the mandatory Chesterfield (two of them), the leather armchair, the obligatory drinks table and French doors, and a picture window swathed in mustard-coloured velvet. 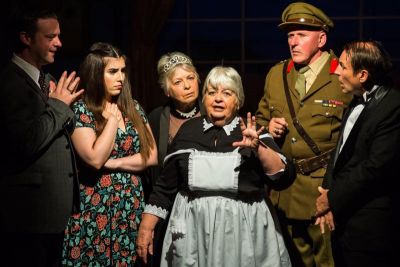 In to this colourful scene arrive the stereotypical characters. There is the talkative retired army Major, played with pompous self-importance by Aurel Vasilescu and the once famous actor, played with acknowledged self-defeat by Larry Murphy.

There’s a freeloading young relative, Charles, played with cheeky impudence by Ben Freeman, who, of course, has his eye on the young ingénue, played with indifferent disinterest by Brittany Macchetta … and an imposing Countess, played with spotlight-chasing validation by Jodie Klopf.

That is, until they all double, briefly, as other stock “mystery” characters in one or other of the various twists the Author devises.

Supervising them all – and supposedly most of the plot variations – are the wealthy, but shrewd dowager, Lady Somerset, played with aloof ‘cool’ by Sandy Velini and her dutiful housekeeper, Jane, played with initial deference and growing control and equality by Marilyn Parsons.

Bloody Murder is not like other murder-mystery-comedies– it’s all of them written into one – and to say any more about the plot (other than some hints above) would, in the words of Lady Somerset “ruin the party”.