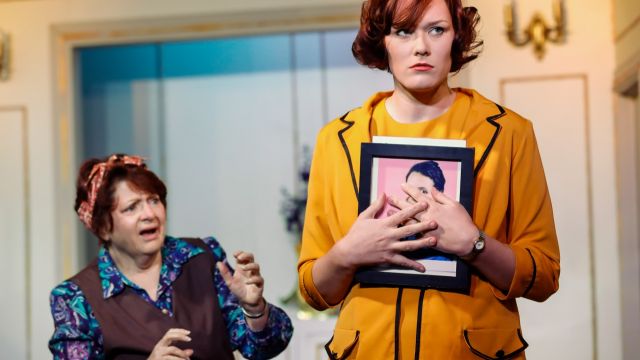 Following its origins in the 1960’s, French farce Boeing Boeing has been revised and also revived in recent years and just like a well-oiled jet engine, the comedy keeps on providing predictable and reliable service. St Jude’s Players are staging the play’s current Adelaide production and an experienced Director and good cast help the company keep Boeing Boeing safely in the air.

Bernard is a successful Parisian architect, who shares his apartment with his air hostess fiancée whenever she flies into Paris. The trouble is, there are three prospective brides, with this fact completely unknown to each of the ladies, who are all from different countries and different airlines. Through careful management and supported by his all-suffering housekeeper Bertha, Bernard manages to keep his secret love life running smoothly; that is, until an upgrade in airline engines results in shorter flights, changed timetables and to the initial delight of each fiancée, more time with Bernard. The set and props are integral to the action, changing subtly depending on which of the American, Italian or German hostesses is currently staying in Bernard’s apartment. St Jude’s is known for good set design and accomplishes the change of mood well, with dove grey apartment walls and white furniture, all of which take on a new look every time Bernard flicks a switch on his portable lighting console. A single photograph takes on hilarious meaning in this comedy and is made the most of by Director Les Zetlein and his cast.

In St Jude’s Players’ production, the male characters are cast with actors older than was probably the playwright’s intent, but this is not a major issue.

John Koch is good as Bernard, slowly developing the panic of his character’s gradual realisation that he has lost control of his ordered and deceitful existence. Even so, I’d like to see a little more physicality and urgency in his portrayal as this would lift the overall pace somewhat.

As Bernard’s visiting friend Robert, Tim Taylor steals most scenes with a very funny and physical performance. His facial expressions are priceless. Charlotte Batty is excellent as the effusive and self-confident American hostess Gloria, while Carla Hardie is delightful as the Italian fiancée Gabriella. Jessica McGaffin has great stage presence and a talent for arm wrestling in her very funny portrayal of German hostess Gretchen.

Always reliable for a good performance, Lindy LeCornu is strong in her role as grumpy and put-upon housekeeper Bertha.

The production is not all happy landings, however, but the issues are relatively minor. Boeing Boeing is a farce, reliant on pace, yet on opening night the production suffered a little in this respect during the first half. This should improve as the season progresses. The second act rollicked along at a cracking pace, serving to highlight that the first half somewhat lacked this energy.

In terms of accents, while those actors playing the American, Italian and German hostesses had appropriate accents Bernard, Robert and Bertha had not a hint of French accent, instead sounding strongly Australian. While I understand that France is neutral territory in this comedy, just a hint of the Parisian for these characters would enhance the production, at least for me.

Overall, Boeing Boeing is a great night out, attested to on opening night by the full house, laughter and enthusiastic applause. Another very good St Jude’s production.