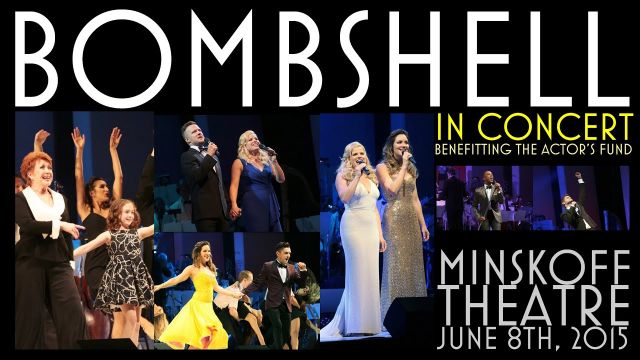 The fictitious Marilyn Monroe Broadway musical at the heart of the series spawned a concert (and a CD) on Broadway with the original cast in 2015. Selling out in 15 minutes, black market tickets to the event were re-selling for as high as $6,000 each. The concert aired this week on TV for the first time as a fund-raiser for the Actors Fund. It was hosted by Renee Zellweger, with Julie Klausner hosting a virtual cast reunion between acts one and two. There was much to enjoy for any fan of the series and for those that weren’t many classy high-powered Broadway performances.

Of course the two Marilyns, Katherine McPhee and Megan Hilty, dominated the show. Opening with “Let Me be Your Star” (according to the cast one of the greatest songs ever written), and closing with “Don’t Forget Me”, these two ladies nailed it every time. Whether belting it to the rafters or being reflective and intimate, they delivered every song as if it was an eleven-o-clock number. McPhee and dancers blew up a storm in “The 20th Century Fox Mambo” and “Public Relations”, whilst Hilty in “The National Pastime” was much more suggestive and phallic than the TV version, with “Let’s Be Bad” running a second-best in the raunchy department. McPhee’s “Never Give All The Heart’ was full of emotion, whilst Hilty’s “Second Hand White Baby Grand” was simply beautiful and in my opinion the best number in the score.

Christian Borle (in suit) and the male ensemble in boxers did a terrific routine to “Don’t Say Yes Until I Finish Talking”, Will Chase was searing “On Lexington and 52nd Street”, a clone of “Sunset Boulevard’s” title tune, and Leslie Odom Jr. was in his element with the big-band salute “(Let’s Start) Tomorrow Tonight”.

Ann Harada got laughs as the continually harrassed stage manager Linda and displayed great comic timing on “I Never Met a Man Who Didn’t Love To Howl”, but it was Jeremy Jordan opening the second act with a blistering version of “Cut, Print…Moving On” that was one of the night’s great showstoppers. It’s a terrific score and one continually admires the attention to detail and period with echoes of Roger Edens and Kay Thompson all over it.

Anjelica Hudson, Bernadette Peters and Jack Davenport were noticeable absent but Davenport was there at the interval cast reunion. Peters was replaced by Donna McKechnie, who didn’t pull the pathos out of “Hang The Moon” the way that Peters did in the series, but the song still worked as a nice tender mother/ daughter moment. Debra Messing and Christian Borle’s introductory remarks were warm and had them reminiscing about the show’s beginnings in easy banter, and the finale had a few words from an emotional Shaiman before McPhee and Hilty wrapped it up with “Big Finish” as the encore.

Just prior to the screening the producers of the original series, Stephen Spielberg, Robert Greenblatt and Neil Merron, announced plans to bring a live stage adaptation of the series to Broadway, with Shaiman and Wittman attached as composer/lyricists and Bob Martin and Rick Elice on book. Who knows when it’ll be on the boards but it’s something to look forward to when the virus is over.