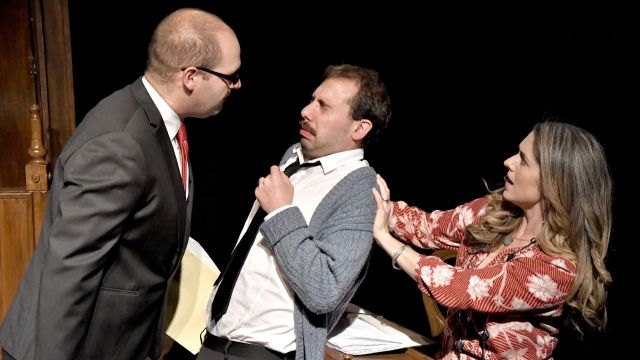 An excellent production of a funny and clever play. Some people thought this was a local parody of the William Shatner TV show Boston Legal. There’s no Denny Crane here. The titles are similar but that’s where the similarity ends.

Tony Laumberg’s comedy opens in the office of a Bondi law firm: a nervous locum turns up to manage the office of a sole practitioner who’s away on holiday. Due to a mix up it turns out the locum has to run one of the firm’s cases that very morning. The locum has never been in a court room and is only familiar with non-court law, like conveyancing and wills. The case is about a suburban mum suing a huge corporation for injury to the family’s pet horse. The daughter sprayed the horse with a product made by the corporation that was meant to add lustre to the horse’s coat. Instead the poor animal lost its mane and fur. The corporation has endless finance to run the case, a supply of expert witnesses, and is using a big inner-city law firm known for its intimidation tactics. It’s a classic David v. Goliath set up.

The rest of the show is set in a Sydney court house. We follow the case through the hearing and verdict. What happens in the court is funny. The hapless locum careens from the opening address to closing argument with all sorts of entertaining nonsense in between. By the way, the locum’s name is Brad Pitt, and much mileage is gained from milking that as a running gag through the show. The main point is that the dialogue, proceedings, and mannerisms of the cast all have the ring of truth about them, and it feels like we’re in a public gallery watching an actual case. When the funny bits happen (which is a lot) they feel natural, even when some of the bits fall into silliness. There are cameos by a wild gorilla, a nasty nun, Groucho Marx and Darth Vader, but I won’t spoil how they all turn up. The humour ranges from clever snappy retorts to slapstick and absurdist shtick.

Laumberg has smoothed over or cut some of the more technical parts of a court hearing for the sake of dramatic effect, humour, and to not scare off non-lawyers in the audience. However, for all its hijinks, the script never loses focus on the ethics, morality, and humans behind the case.

The cast of five are all excellent, nailing the characterisations and timing. My favourites were Tricia Youlden as the Magistrate and Valentino Arico in the multiple roles of holiday lawyer and expert witnesses. Richard Cotter’s direction is spot on and shows great understanding of the text. The tech aspects are also solid. It seemed one of the cast had the wrong mobile phone prop, because whenever they called someone it was the caller’s phone (not the recipient’s) that rang. On opening night one of the cast dropped volume while delivering lines, so ends of sentences were missed. Another member rushed through some of the wordier parts of their lines, so those bits were also missed. All that sounds like an opening night thing.

This is a fun show for lawyers. But does it stack up for non-lawyer? I rely on the testimony of my expert witness: Ms Plus One, who has no idea of law or court hearings. She loved it, found it hilarious, and had no problems following it.

Verdict for the Production.

Bondi Legal is represented by David Spicer Productions, which also represents the works of the reviewer.