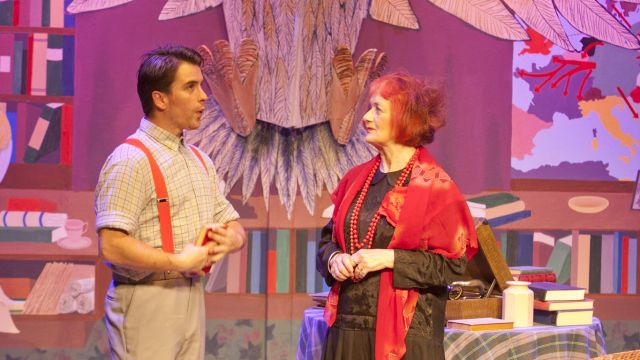 Though it may seem a long way to Ferntree Gully, it’s always worth the effort to visit 1812 Theatre. For this, their third season of the year, Director Chris Proctor has pulled out all the stops for an ambitious production of The Book of Everything – a deceptively simplistic play that gives a child’s perception of a complex and multi-layered adult world. It’s a charming and beguiling play…but nowhere near as easy as it seems.

Proctor sets the ambience for us right from us entering the theatre foyer. There’s marvellous music from Helmut Lopaczuk and Richard Foster on jazz accordion and guitar. They play standards from the forties and fifties and some of the company members playing the residents of Amsterdam (not residence, as the programme wrongly states) danced together in the foyer. The atmosphere was so joyful that many of the first night audience joined in the dancing, even those of an age where it could have led to injury. The two musicians also provide the background music, on stage, to the play itself, and that provides a marvellous connection between stage and audience.

Briefly, the play is the story of Thomas Kopper (aged nine, nearly ten), who is writing, in his Book of Everything, even the smallest details of his life. There’s a religious and abusive father, a rebellious sixteen-year-old sister, a battered mother and a ‘witch’ (an old widow) who is their neighbour – as well as a feminist aunt and a lovely crippled girl with a leather leg. Oh, and yes…there is Jesus, confused about where his father has disappeared to until Thomas explains that God died the last time he was beaten.

Proctor handles the staging with panache, although in the moments of narration, placing the actors upstage means it is sometimes very difficult to hear them. I saw the MTC production of this play in 2013, and this rendition holds up really well – and that’s a credit to Proctor and his production team, especially Robin Emmett for his special effects.

As with most community theatre productions, some of the cast are not quite up to the task, but when the performances are good, they are truly excellent. Matt Phillips is most impressive as Thomas (though perhaps a little more stocky and developed than is called for). Totally convincing as a child; he is well supported by Dhania McKechnie as older sister Margot. McKechnie is a super talent in her own right and excellent. She will no doubt impress even more after her Actor’s Residency at NIDA next year. Frank Schrever does a fine job in the unsympathetic role of the father (even managing to find all the moments of vulnerability), and Jackie Hutchison is a hoot as Mrs Van Amerstoort, the witch.  Her scenes with Thomas are particularly whimsical and enchanting. It’s also great to see Stephen Barber as the most unlikely Jesus you will ever encounter. I fondly remember his performance as Father Welsh in Lonesome West. While the pace was a little slow for the opening, it will undoubtedly pick up as the production settles in, and there’s always the excellent supper and bubbles to look forward to (not just opening night, but after every performance).

One thing I still feel strongly about though is this being advertised (as MTC did before 1812) as a play for the whole family. It’s themes are Domestic Violence; bullying (Margot holds a knife to her father to stop him hurting Thomas, after bashing and punching their mother); the dangers of fanatical religion; human frailty and fear. These are not children’s concepts and some kids may find the play very confronting (my own grand-daughter was incredibly distressed to see a man punch his wife in the stomach at the MTC production). The adult themes, and the contemplation of the existence of God, make this, rather, a play for the inner child in all of us. But it is appealing and often delightful, and this is another string for 1812 to add to its award-winning bow.