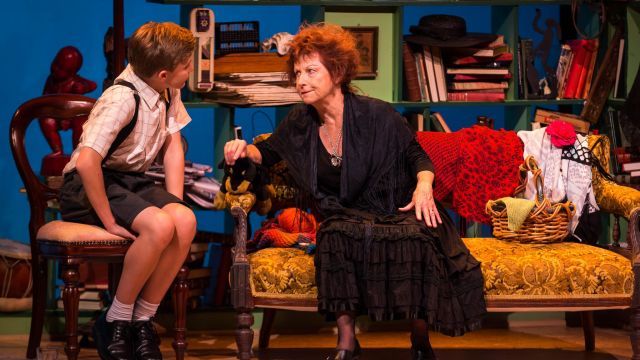 Adapted by Richard Tulloch from the novel by Gus Kuijer. Caste Hill Players. The Pavilion Theatre. Mar 31 to April 22, 2017

When I first saw this joyous, quirky little play at Belvoir a few years back, I was absolutely charmed. Despite it’s dark themes of domestic violence and religious hypocrisy, I was totally swept up by its whimsical, optimistic sense of hope. It’s a wonderful uplifting Australian stage adaptation of a Dutch novel by Gus Kuijer,

Similar feelings washed over me again at the Pavilion Theatre watching Carol Wimmer’s production for the Castle Hill Players.

Set in Netherlands in 1951, nine-year-old Thomas Klopper (an extraordinary performance from young Brayden Sim) breaks the fourth wall to share the stories in his Book of Everything, where he records all the events of his life so he will remember them. He captures Thomas’s disarming naievety and honesty in a truthful, engaging performance.

The multiple levels and wall-less acting spaces of the design by Steve Wimmer make the stage feel very expansive, and enable a cinema-like flow through most of the production

Young Thomas Klopper has one ambition in life - to be happy. The impediment to this happiness, and that of everyone else, seems to be the play’s one thoroughly unlikeable and unsympathetic character.

As Mrs Klopper, Michelle Masefield embodies the sad, tragic victim of domestic violence, seemingly powerless to defend herself or her children.

Still, all isn’t gloom and doom within this embattled family. 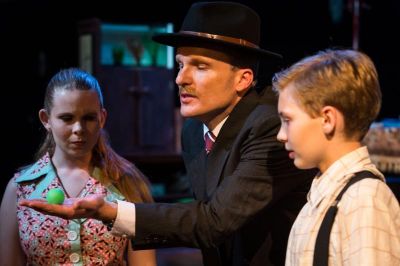 There’s a delightful rapport in the totally believable sibling relationship between Brayden as Thomas and Holky Bramble as his sister Margot, moving beautifully from an older sister, impatience with a nuisance younger brother, to a warm affection as she discovers that he really is special. Holky captures Margot’s stronger survival instincts delightfully.

Yet outside the Klopper home, Thomas’ world is peopled by extraordinary characters

Thomas loves Eliza, a 16 year-old girl with a leather leg which squeaks when she walks, played sympathetically and engagingly by Suzanna Volokh. As kooky bicycle riding Auntie Pie, Annette Snars becomes a delightfully eccentric feminist and a surprise force of nature.

Anne Geenen is warmly eccentric as Mrs Van van Ammersfort, the ‘witch’ who lives next door, who helps Thomas turn his father’s fire and brimstone biblical readings back on him in wickedly left of centre style.

Then, there’s Jesus (Gavin Jameison), regularly chatting with Thomas and setting a more truthful spiritual compass for him.

To end this fable, the moral finally packs a real wallopping for the pompous, sanctimonious villain, as he’s sent off, tail between his legs, to try and find a better version of himself. The audience cheers!