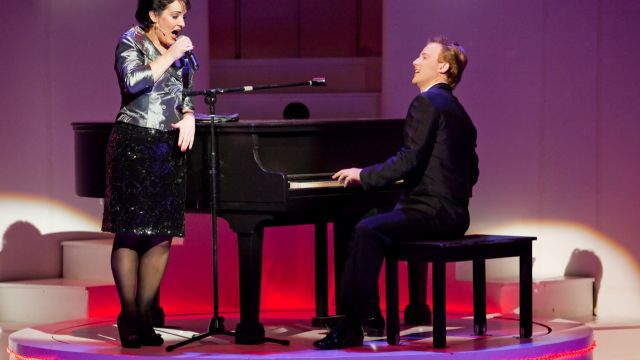 If I see one more shaking maraca I might burst, but I still get a kick out of seeing The Boy From Oz, which this month is almost every weekend.

The Gosford Musical Society sure knows how to excite its community. Their 16 performance season sold out before opening night, and extra performancess sold out in hours.

The buzz started in the foyer, it was decorated with Australian flags, and a genuine saddle sewed by Peter Allen’s grandfather, George Woolnough, was under glass in the foyer.

The inside was just as impressive.

Peter Allen, played by Wil Coleman, descended to the stage on a rocket. The rest of the night stayed in the same stratosphere.

The double storey set was stark white, allowing for splashes of colour and stars to light the stage for the scenes from Tenterfield to Hong Kong to New York.

The production team headed by Director Chris King undertook a great deal of research into the Peter Allen’s life. Wil Coleman’s mannerisms were so true to Peter Allen than in one scene when he was sitting and swaying on a piano it looked like a video clip had come to life.

In the audience was Peter Allen’s first girlfriend from Primary School. She told me afterwards that she found this production titillating.

My only reservation about the night was the abrupt unscripted end to the First Act, which tarnished what was otherwise as good as any community production so far.

The next night I ventured into the magnificent 1400 seat Civic Theatre in Newcastle.

The Metropolitan Players have lost big dollars in recent years and gambled their future on a two week season in the biggest theatre in town.

They decided that if they are to go bust, at least they will do it in style.

The steel city took to Peter Allen, so the Players will sing and dance for many years to come.

Their set was simpler than GMS. The stage was dressed in giant keyboards, which was a neat set to dance on.

Grant Drury-Green was as smooth as silk as Peter Allen.

Like Gosford there was also crisp choreography, dazzling costumes and a great surge of excitement when the choir entered for I Still Call Australia Home from the audience.

My only slight disappointment was that the Players couldn’t find a child to perform the role of young Peter.

The main fixture was an archway with special sets such as the pub dropped down from the fly tower.

I went on opening night and from the moment it started, Jarrad West as Peter Allen was as cool as a cucumber and as comfortable in his skin as a veteran performer.

He triumphed over a cold, and when a line slipped, I almost volunteered to prompt.

The highlights of the night were the excellent choreography and eye smacking gorgeous costumes during the Rio sequence.

A slight disappointment was the compromise made in the band with some brass replaced by keyboards.

I will now put the Maracas back into the saddle, at least until a certain production in Melbourne.

*David Spicer is the agent for The Boy From Oz.