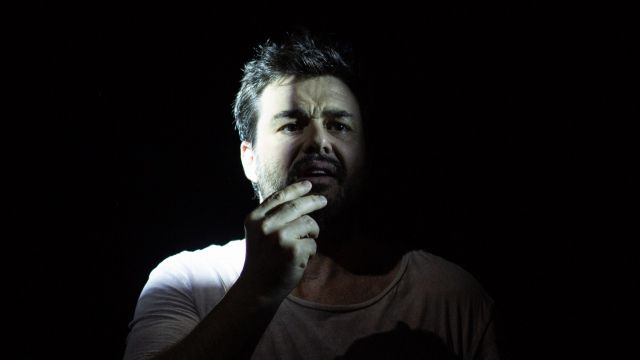 The latest offering from The Street’s First Seen program, Peter Cook’s first play Breaking the Castle, is an extraordinary and beautiful portrait of an actor’s life as he descends into and then overcomes meth addiction. It begins with what seems like a conceit: David Smith (played by Cook) as an actor, talking about how in control and connected with the audience he is and more tenuously, how the audience themselves were reacting. As the opening monologue progresses, the character hasn’t yet built a rapport and it feels a little like we are being told how we should respond. But then, David begins building this relationship with the audience and by the end, however, it was absolutely true—the audience were right there with him, feeling his urgency, despairs, desperation and relief. 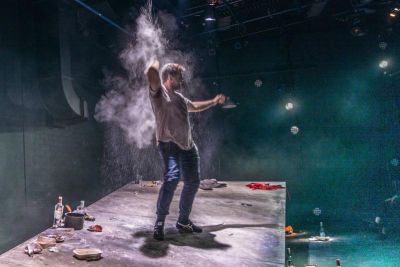 The production springboards off the script’s poetic descriptions, and overlays a perfectly-timed sound and lighting design, which works in the small area of Street’s Street 2 theatre space to immerse you in David’s psyche, making you feel almost as if you are literally inside David. The design moves between realistic to surreal and dramatic, and producing an overwhelming, visceral experience, which is something Street’s design team of Imogen Keen (production), Gerry Corcoran (lighting) and Kimmo Vennonen (sound) excel in creating.  There’s a moment when David lights a meth pipe. In reality, it’s a miniscule event, but it’s something that the addicted David is focussed on with every fibre of this being. Here the light and sound work to blow out that tiny event, which has props you can barely see, to become as focal as it is to David. They do this by amplifying the tiny chink noise as the rock hits the bottom of the pipe, and the little hiss as the lighter flares underneath, and shrinking the light to throw focus on David, his words and his paraphernalia. At other points, the experience of being high is conveyed with lighting appearing as veins, as though looking at light through the insides of the eyelids; later red light throbs with the lyrical rhythms of the description of orgasm while high.

This may seem bleak but ultimately this is a narrative of hope, as David spends time in an addiction clinic in Thailand and finds the means to pull his life back together.

“For the first time in years, that took me out of the theatre,” was my companion’s verdict. This was an incredibly powerful work that was a privilege to see.