Jacques Brel Is Alive and Well and Living In Paris 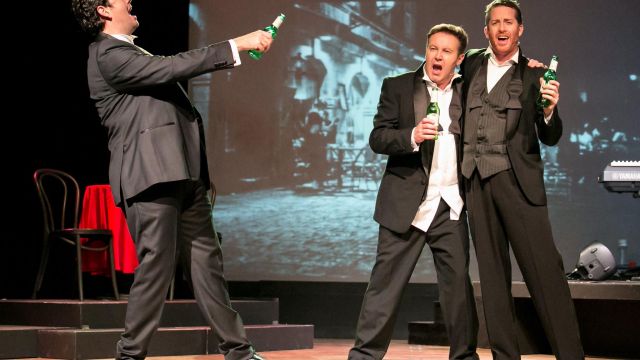 I cannot rave enough about this production. It was like watching a master class, and those of us (me included) who think we can direct, md, sing, act, light, sound, costume, and design sets will doubt our abilities after watching this show.

First some background. Confirming that only good things come from Belgium, Jacques Brel was a Flemish poet and songwriter who rose to prominence in the 50s and 60s.

His songs are not easily digestible pop lollies but reflect life from an adult perspective. Not much was off limits: psycho exes, high maintenance girlfriends, dirty old sailors, death, dying, war, one-night stands, the homeless, getting old, getting drunk, social class, the circus of life. All of these were written with humour, heart, pleasing melody, and Gallic sensibility. Interestingly in one of his songs he predicted the rise of the sex tape. He wrote an innocent sounding lullaby but dropped an f-bomb in the middle – all to good effect. This is as far from Eurovision as you can get. One of his tunes was adapted into Seasons in the Sun, but don’t judge Brel’s output by that. Piaf, Sinatra, and Bowie were among the many who covered his songs.

His influence is widespread, and is one of those songwriters that inspires other songwriters: Paul McCartney, Paul Simon, David Bowie, Leonard Cohen, Billy Joel, the Dresden Dolls, Stephen Sondheim, and Jason Robert Brown drew from the well of Brel. When you hear songs like Changes, Hallelujah, Sounds of Silence, All You Need is Love, She’s Leaving Home, Maxwell’s Silver Hammer, We Didn’t Start the Fire, and Not Getting Married then you hear Brel’s influence.

History Lesson over. So, apart from getting an education and expanding one’s cultural horizons why should you bother seeing this show? Because it’s so entertaining, and in such a powerful, emotional way. The set suggests a warm and cosy Parisian café. Piaf could be the headliner. There’s no story, but each song in itself tells a tale, so it’s like a musical version of reading a collection of short stories.

I’ve known these songs for decades, yet it was as if I was hearing them for the first time. Of Brel’s “death” songs I enjoyed the one sung by the corpse who knows what the mourners at his funeral are really thinking and calls out their hypocrisy and insincerity. One of the songs had a lyric change, so that “you’ll want to beat her black and blue” is changed for something that better reflects Brel’s intent for a modern audience. I’ve heard many versions of Ne Me Quitte Pas (aka If You Go Away) and this was the best.

The cast of six  - Anne-Marie Fanning, Jennifer Parbery, Nicholas Ryan, Margaret Short, Andrew Symes and Tim Wotherspoon – are uniformly excellent, and I can’t single out one above the other. And the singing: just wow. M.D. Mark Cranston Reid has re-tooled some of the arrangements for his four-piece band and I consider the re-workings to be improvements on the originals.

You can’t just “sing” Brel: you need to “live” the songs to get the impact across. On that point full kudos to director Geraldine Turner for getting the cast to find their way to wring meaning from the lines. Further congratulations to Ms Turner for not only her poised staging but her vision in giving these songs a modern touch without losing their universality. Try not to be moved  - I dare you - when watching the visuals that accompany the final song If We Only Have Love.

Everything was executed with dignity, sincerity, and joy. Reviewers don’t often give standing ovations but I had no problems doing so here.

I know many folks whose taste in musicals is only in pop blockbusters with big glitzy effects and over-movement. Nothing wrong with that. But it’s sad to think they could be missing something more potent by not taking a chance with this show – a bit like the moviegoer who only watches Marvel and Star Wars but doesn’t realise what they’re missing by skipping a small indie gem.

I hope this show sparks a revival in Brel’s songs and gains him some more accolytes.

And Geraldine Turner called me a crazy person. What more could I want?