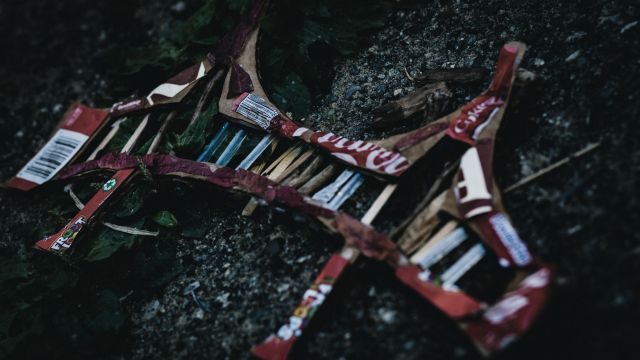 The Bridge, written and performed by Nick Rinke and Caitlin Docking, is a new play from Canada. Very rarely, if indeed ever, do we see contemporary work from Canada. This is great shame as we are missing out on some truly excellent plays.

The Bridge is an ‘apocalyptic play’. Two young people find themselves ‘on the road’ after the apocalypse. They are alone and walking to San Francisco in the hope of finding other people. To stop themselves from going mad from the overwhelming silence, they try every means they can to dispel their fear and despondency – singing, dancing, and playing games.

This includes ‘shadow puppetry’ in which they play the characters of ‘Captain’ and ‘Lieutenant’, along with other characters such as a pack of wolves and Christopher Walken. They also have that grand ‘hippie’ classic 60s pop song, Scott McKenzie’s San Francisco, which is the only piece of music they have on an old and dying mobile phone. They are starving and yet remain in hope, until they make a fateful decision that ends the play.

This play is concise and engaging. The audience yearns for a happy ending, but it  would be romantic and sentimental, inappropriate and illogical for this human tragedy.

The play begs the question, could we live with silence, with no noise, with nothing around us, in a kind of sense-depredation hell? The answer is probably ‘no’.

This all sounds very depressing; but what makes this 50 minute one-act play so compelling is the wit and ‘gallows humour’ of the writing and the engaging performances of the two young Canadian actors-writers.

This a very poignant and important addition to this year’s Adelaide Fringe Festival.