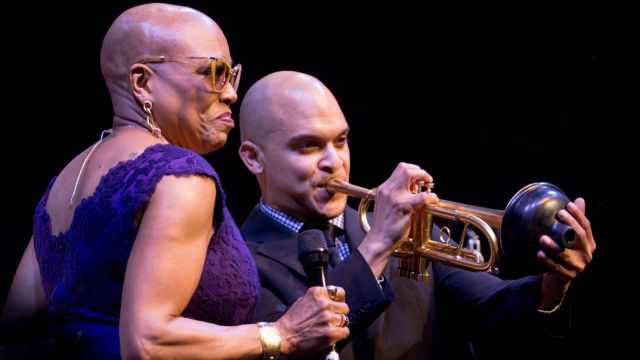 The final night of this year's Melbourne International Jazz Festival brought us Dee Dee Bridgewater and the New Orleans Jazz Orchestra (NOJO) with trumpeter Irvin Mayfield at the helm as musical director. With a setlist embracing jazz standards like What a Wonderful World, iconic blues shouters like Saint James Infirmary, and even spirituals (Come Sunday, performed as a tribute to Mahalia Jackson), the evening gave us a rich assortment of musical treats, performed by a tightly-honed orchestra with arrangements that brought back the spirit of the big band era. It's rare that we in Australia have a chance to hear performances of this calibre, and any opportunity which brings an authentic New Orleans sound to our shores is one to be applauded. While all the musicians worked beautifully together as a unit, the set also provided plenty of opportunities for them to shine individually as soloists.

As the star attraction of the show, Dee Dee Bridgewater performed with plenty of power, delivering each song with a similar level of intensity. This did leave one wishing for a little more contrast in the material with some quieter, more introspective pieces, but the setlist seemed designed to showcase her vocal strength so punchy, driving volume was the order of the evening. This may have been due in part to the need for Ms Bridgewater to match the NOJO, who were doing their best to blow the roof off Hamer Hall.

It was a powerful and rollicking performance, but the pacing and setlist could have been better planned out. There were long intervals in which Mr Mayfield talked to the audience, at the expense of more music, and some tall tales were told which seemed frankly out of place. Given how much she was talked up by Mr Mayfield as the star of the show prior to her introduction, it was surprising that Ms Bridgewater then spent much of the set sitting on a chair listening to the orchestra perform - at times it seemed they were the stars and she the guest, but that's not how the gig was promoted. It all seemed a little impromptu, despite the obvious commitment of the performers and their familiarity with the material. But as stated, the arrangements were solid, the music sounded wonderful, and most everyone seemed to be having a great time.