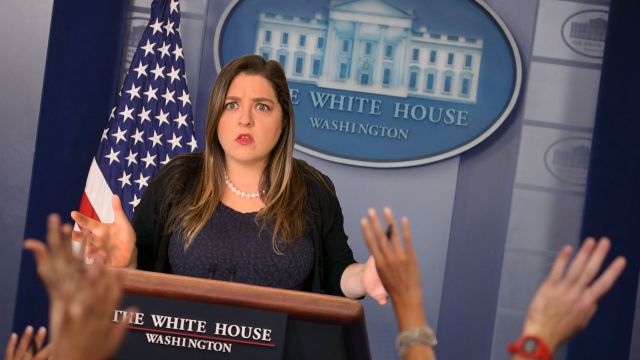 This performance highlights the strange and troubled times that we face in the current global political landscape. The show imagines the former White House Press Secretary, Sarah Huckabee Sanders, on tour in Australia and wreaking havoc. McGlensey cleverly structures the comedy routine as a press briefing where the audience stands in as the members of the press.

She is accompanied by her faithful bodyguard, Gumbo (Randy Adeva) who is a great touch to the show. He adds a clear comic reference to an otherwise very authentic looking scenario. The performance opened with some great parodying of the bold-faced lies that are often spruiked via the White House in an effort to validate Trump’s presidency.

The audience is treated with the same contempt and bullying tactics that kept Huckabee Sanders in her post for a significant length of time (given the highly volatile nature of terms of employment in the current administration). McGlensey’s impersonation of the southern accent is pitch perfect and the bizarre nature of this formidable character is evoked in phenomenal fashion.

The briefing includes some amusing slide presentations which alludes to the way in which Australia’s alliance with the US has become rather awkward. McGlensey’s routine especially points out how the political spin is virtually shoved down the throats of the audience. The highly defensive and aggressive tones are accurately conveyed.

The segment involving Q&A was less developed and, despite some prompting from other actors, it was difficult for the audience to engage in this way. Thus, the opportunity for a more improvised approach to the show was somewhat lost. Nonetheless, McGlensey demonstrates great writing and performing talent and provides some light-hearted respite from a very dire political reality.