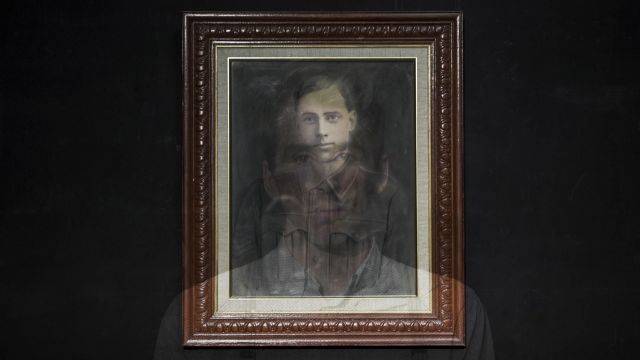 Mark Salvestro tells an ostensibly true story about his Great Great Uncle George Bradford - and about himself.  Is it really true?  It doesn’t really matter: ‘true’ – merely true - can be a trap.  The question is, what does the playwright make of his ‘true’ story?

The thing that lifts what could be a frankly familiar tale of the ancestor at Gallipoli above the usual is Mr Salvestro’s  - or his character ‘Mark’s’ - motive for telling it.  He is fascinated – or more exactly obsessed – not just with George Bradford but with the romance and marriage of George and his sweetheart Ruby.  It’s a fascination all the more obsessive because actually George is a bit of an enigma.  There’s a portrait there on stage, but although Mark has researched as far as he can – including travelling to Forbes, George’s birthplace – so much remains out of reach.

There’s an account of the Gallipoli landing, but it comes from ‘history’ and Mark’s imagination – and his imagination fails him and he gives up writing it.  There are letters from George to Ruby – but are they real or more products of Mark’s imagination?  He is thrilled when a relative tells him he looks ‘like a Bradford’ – i.e. like George.  As the show proceeds, we realise that Mark does not just want to find out about George and reconstruct his life, he wants to be George.

Mr Salvestro has a kind of vulnerable persona that gains the audience’s sympathy, at least at the start.  As his story develops, some may withdraw from his sad nostalgia.  His ‘Mark’ is a 22-year-old misfit in today’s world.  He longs for love, but hates the cold contemporary ‘dating scene’ – as he hates contemporary pop music, yearning for – and singing sweetly – songs from George’s era.  ‘Oh, You Beautiful Doll.’  ‘Pack Up Your Troubles (In Your Old Kitbag).’

Mr Salvestro cleverly and amusingly contrasts a noisy disco with the sweet silences of the romantic past – helped by his accompanist Daniele Buatti on keyboard – and does it so well we go with his choice.  But Mark’s obsession is also costing him his friends.  It leads him to go alone to something called ‘Gallipoli Camp’ at the Showgrounds where he and his swag are soaked in a sudden rainstorm – even as he has to admit that this discomfort hardly compares with George’s.

But in the imaginative reconstruction of George’s life, the romance of George and Ruby takes clear precedence over Galllipoli’s fighting and heroism.  Mark imagines George and Ruby’s first meeting at a dance in the Forbes Town Hall.  He invents and plays out their first awkward conversations – including Ruby’s embarrassed announcement that she’s pregnant when they’re not even engaged.

What Mark longs for, yearns for is the romance of the past, which he is determined to believe was simpler, purer and more genuine.  As George, he idealises and is in love with Ruby.  There is genuine pathos in this yearning and it is the real raison d’être of the show.

After the show, however, The Companion asked me, ‘Does every Fringe show have to be reflexive?’  That is, a show that begins and sometimes reverts to the problems of making and putting on the show (a plea, really, for sympathy and forebearance)  – instead of just, well, putting on a show.  Apparently.

There’s an irony in the case of Buried at Sea: it has a problem that Mr Salvestro does not resolve: his story is incomplete.  It has no real ending.  We infer from the show’s title that George, wounded at Gallipoli, never made it home to Ruby and was buried at sea.  But Mr Salvestro makes nothing of it, not even a reference, so the show ends with George (and Ruby) still a figment of Mark’s imagination and Mark himself stuck in an alienating reality with a unresolved obsession.  I.e. back where we started.  To find a satisfying ending for such a piece may be impossible, but the lack of one is disappointing nevertheless because the show’s premise is original and insightful, adding a new perspective to our nostalgia for the ANZACs and their stories.