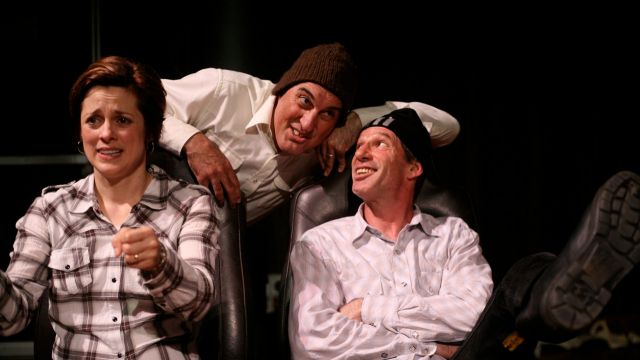 Country high school students helped Zeal Theatre develop Burnt, a touring storytelling play about the impact of drought, commissioned by the Sydney Theatre Company.
Zeal’s three performers deftly switch between a whole community of characters to tell a story of country teenagers, their parents, friends and community, under stress. Despite this dark theme, it’s mostly quite a lively romp.
Tom Lycos, Stefo Nantson and Lindy Sardelic warmed up the predominantly schools audience with a rock jam session. Musical effects would play a vital part in evoking the theatrical landscape all night, never better than in a violin interpretation of a locust plague.
Scattered across a black box stage were petrol drums, sun-bleached animal bones and skulls, battered chairs and miscellaneous odds and ends which provided the play’s settings.
The frequent laughter of recognition made it clear that the experiences and behavior of country teenagers resonated with their city counterparts.
Indeed, the voice that resonated most truthfully throughout Burnt was that of youth. Adult characters felt a little two dimensional and stereotyped by comparison, except for the pathos of more heightened moments.
Not surprising, perhaps, given that teenagers originally told the stories. The play, too, was designed for a young audience.
Zeal has had a ten-year relationship with the Sydney Theatre Company’s educational arm, reaching beyond mainstream Sydney patrons to school and regional audience.
Neil Litchfield