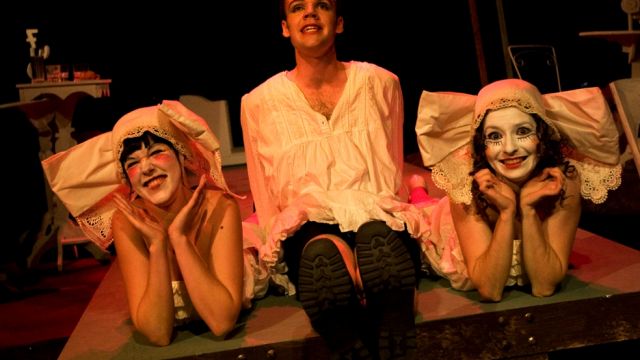 Memories of the Oscar winning movie, and of Liza Minnelli and Joel Grey, flood the memory at the mention of Cabaret.

New Theatre is currently presenting the stage musical which inspired the movie masterpiece. It’s a very different piece – a much more conventional musical, with lots of the more conventional character songs, cut from the screen version.

Stephen Anderson’s Emcee initially surprises – looking more the stereotyped Arian ideal than I’ve previously seen, a strong juxtaposition with his outrageous dress and behavior. In the hands of Sheridan Harbridge, Sally Bowles is lively, effervescent and vulnerable – blissfully naïve to the course of events unfolding around her. Matt Young’s Clifford is appropriately earnest and believable, while as the prostitute Fräulein Kost, Crystal Hegedis is engagingly opportunistic. Patrick Spicer captures a fitting mix of charming and manipulative as Max.

One of the film’s biggest departures from the play lies in the Jewish / anti-Semitic sub-plot. Minimal characters in the film, landlady Fräulein Schneider, and Jewish fruit merchant Herr Schultz, are an older couple whose engagement and happiness are destroyed by the rise of the Nazis. Lost from the film are their Brecht / Weill inspired songs, impressively and appropriately delivered by Colleen Cook and Barry French as part of their truthful, moving portrayals.

A highlight of the evening at the end of act one chillingly nailed the rise of the Nazis. The second act, as written, seems mildly anticlimactic after this pre-intermission impact.

In a production strongly charged with sexuality and promiscuity, the majority of the ensemble get it just right, though for just a few it appears a slightly uncomfortable fit and a little forced.

A more conventional musical than the movie suggests, yes, but Cabaret is one of the better book musicals, and New Theatre’s production is a very effective one.