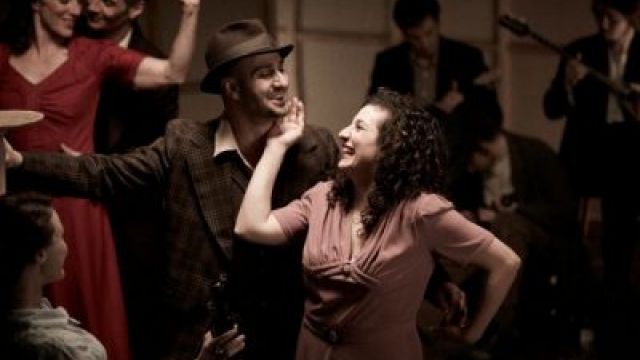 Cafe Rebetika is a contemporary Australian musical with a huge heart that was inspired by a fascinating time and place in Greek history. With the support of the Arts Centre it has been honed, through its development, with great integrity and sensitivity to a point where it should ‘take off’.  What it most needs at the moment is for Melbourne’s Greek audiences to fill the houses and bring with them as much love, tenderness and understanding as the piece itself has been melded with.

On an ambient and very serviceable set of an underground café, designed by Bill Buckley, a gypsy-like group of radicals, misfits and musicians live their troubled communal lives through the 1920s and 30s. Mistakes are made and tragedy ensues. Male pride and prowess is examined and melancholia dominates.

All actors shine in their roles. Sophia Katos as Fofo displays a delightful energy and warmth. As Stavrakas, a manga, Harry Pavlidis truly fits the bill. The strong and earthy character of Areti is beautifully fulfilled by Jennifer Vuletic.  Stunning musicians support and underscore the whole with deft and consummate skill.

On opening night in the Playhouse I sensed the bump in time was not adequate, as the lighting was not only dull but too shadowy at times.

Cafe Rebetika now needs to be taken in hand by someone who has not been lovingly tending and protecting it, to demand it reaches beyond the proscenium arch with more volume and energy and joy. The didactic air could be reduced. Missing is a variety in rhythm and pace and, most particularly, sublime heightened joy in living that can eclipse pain and adversity. So much has been achieved in the process of the work to this stage – just a few small steps are required to bring a palpable dream to fruition.