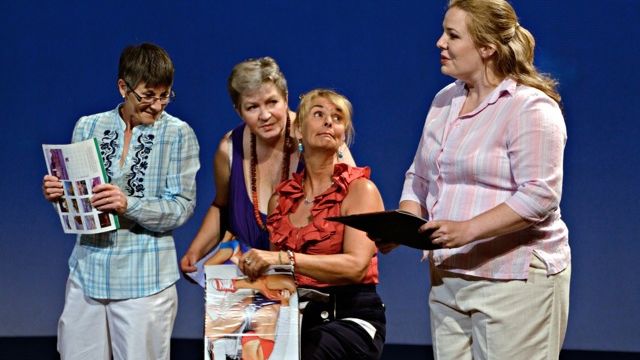 Calendar Girls is a comedy with heart. How can it not be, with moments of grief, clear-sightedness, determination, and truthfulness, mixed with women with hearts of gold?  The cast assembled by director Catherine Hill managed to express all this and more. Truly a golden ensemble!

Naoné Carrel is marvellous as feisty florist Chris, who takes Annie’s calendar idea and runs with it. Annie, played by Elaine Noon with compassion, dares to push boundaries with the Women’s Institute. Megs Skillicorn’s Ruth was vulnerable and desperate to please, and believable as she grew a spine and stood up for herself. Judi Crane’s Marie was marvellous as the head of the local WI, with her desire for status and her own weaknesses.

Direction and humour made the calendar photography shoot the highlight of the play. The actors were swift and cheeky, and it went very smoothly. The “reveal” of each month was most amusing. The lighting design was strong. Kudos to stage management and properties for the huge amount of props and coming and going that was involved. The outside scenes were somewhat less successful than the well-planned interior, understandably a bit difficult given that this is an adaptation of a film.

Calendars made by Canberra Rep’s own actors are available at the theatre as a fundraiser for charity.