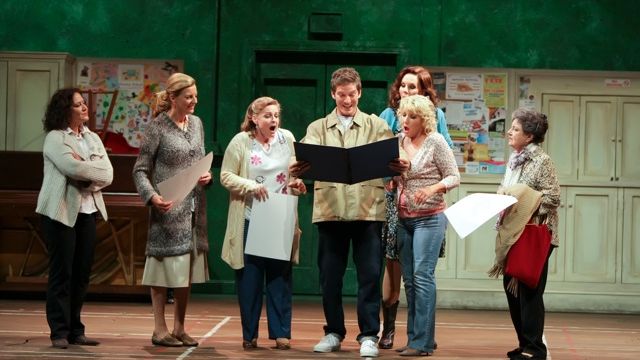 Calendar Girls opened its eastern capitals tour in Brisbane after a blaze of titillating advertising. It lives up to its promise.
This is a show full of heart and laughs.
A real life event prompted a popular movie. Subsequently the principal screen writer, Tim Firth, adapted it for the stage. The action focuses on six of the original eleven Women's Institute members who posed for the calendar prototype.
Playing those women in this touring season are Amanda Muggleton, Anna Lee, Rhonda Burchmore, Jean Kitson, Lorraine Bayly, and Rachel Berger. Cornelia Frances plays the righteous Chair of the Yorkshire Women's Institute whence the concept of nude calendars for fund raising originated.
A further five actors support them in minor roles: Annie Byron (Lady Cravenshire), Tony Cogin (Rod), Andrew Cutcliffe (the photographer), Debora Krizak (Elaine), and as the charismatic husband whose death from leukaemia triggered the fund-raising, David Downer.
Despite its serious theme, this is a feel-good situation comedy. If you aren’t familiar with British Women's Institute, think CWA especially in rural areas. They share similar conservative values.
The elaborate efforts to disguise the nudity for the photo shoots are hilarious. Appropriately there’s a wee break after that sequence before the Act 2 fallout.
If it’s skin you’re after, look closely at the publicity shot of the female leads tastefully arranged around a piano. That’s as much as you’ll get.
But take three tissues, two for the tears of laughter and one for the sentimental moments.
[Just for the record: The women hoped calendar sales would be sufficient to buy a new waiting room sofa for cancer patients’ visitors. It ended up raising enough to open a new leukaemia wing. To date similar calendar events have raised over eighty-five million dollars for cancer research.]
Jay McKee