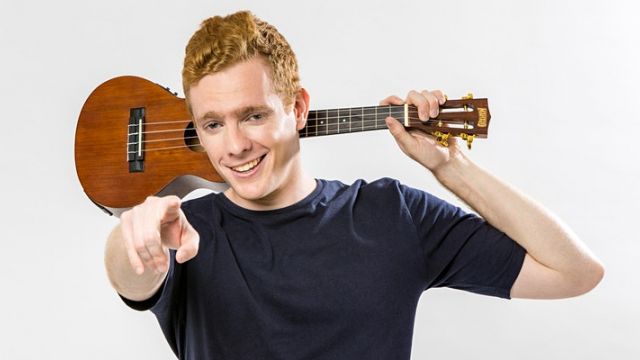 Callum Straford is an engaging, amiable young bloke, who does sketches, stand-up routines, and sings his own songs, accompanying himself on piano or ukulele.  His material may veer briefly into satire, but mostly it’s about the trials and awkward interactions of contemporary life, such as an inept attempt to hook up at a party, a very decisive, even cruel dumping of a girlfriend, insomnia, the indifference of God, or talkback radio.  He is intermittently interrupted and corrected, to his chagrin, by a mentor/producer/director via the PA.  It’s the old self-referential trope of this kind of show – that is, we’re always being reminded that this is a show – about Callum.

At one point, he narrates a ‘children’s story’, with the aid of slides, about four not so cute animals in a share house.  I’m afraid this routine falls a little flat.  But then, unfortunately, so does much of the show.  The problem isn’t that much of Callum’s material is not so great.  In fact, he’s clearly inventive and has multiple skills.  If you listen closely, there is some sharp observation and incisive wit here.  The subtle references to his Mum showing up in the wrong places is brilliant.  (When his ‘silliness’ segues into the surreal, it works.)  Callum is also a terrific mime, but overall, the problem is with his delivery.

Maybe he was having a bad night, but it was a little hard to believe that he’d already done this show at the 2021 Comedy Festival and, indeed, performed it the night before I saw it.  All the way through, he seemed to be in such a hurry so that he kept stumbling over his text, slurring words and sacrificing what some good old comic timing could have brought to the material.  If there’s too much material for an hour, perhaps cut some?

He bills the show as a ‘whirlwind of sketch and musical comedy’.  The ‘whirlwind’ may be the problem: the show blurs and we’re not swept up, we’re not dazzled.  Is there a director involved?  A dramaturg?  Either one could help.  We like Callum, so we just want him to have better material and be better in performance.