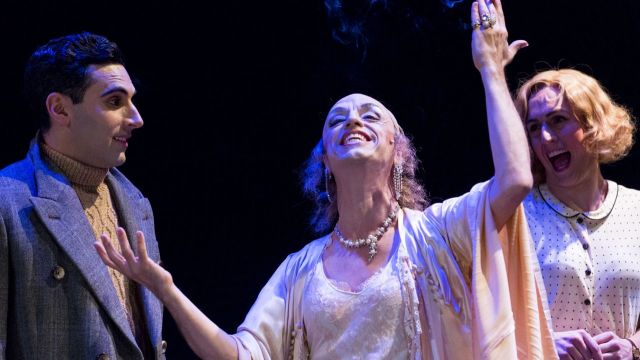 Melbourne’s outrageous Sisters Grimm teamed last year with the Sydney Theatre Company to bring us Little Mercy, a high camp, highly sophisticated spoof on 1940’s psycho-horror films. Now they’re back with a witty take on film divas past, this time matching the considerable acting and drag talents of Ash Flanders with those of unique cabaret artist/actor Paul Capsis.

Fallen 1930’s star Beverly Dumont, now wheelchair bound, reaches again for fame with a chance to film her last stage work. It’s a Roman epic about Julius Caesar, Calpurnia and Cleopatra which on Broadway went the way of the Great Crash.

Foolishly Beverly gives a minor role to a gorgeously innocent, blonde kitten called Violet St Clair, who transforms into a monster of ego and foul plotting. The divas turn rivals and the film set echoes with murder, fraud and mafia threats. Directed and co-written by Declan Greene, the play moves artfully from Beverly’s reclusive apartment to a film version of the studio shenanigans, shot live with the actors behind a front stage screen. In script and style, the film work is impressive – and deliciously queer-subversive.  Capsis channels the ghosts of many divas, with perhaps Gloria Swanson and Bette Midler winning the race. While inconsistent in the first scenes, Capsis hits his stride with a cacophony of wide-eyed stares and feints in the close-ups of the film.  Flanders, also a co-writer, is perfectly measured and grounded as the ingénue turned diva.

The film slips ultimately into a confusion of plot twists and psychodelic multimedia nightmare.  A more balanced integration of stage and film mediums may have helped.

Adding gravitas is Sandy Gore who, with authorial voice, delivers a finely tuned Michael Caine version of the butler, Tootles, and, later, the mysterious producer Maximilian. Peter Paltos is also right on type as the young director.

Like an old diva, this inventive entertainment will inevitably perfect with age.