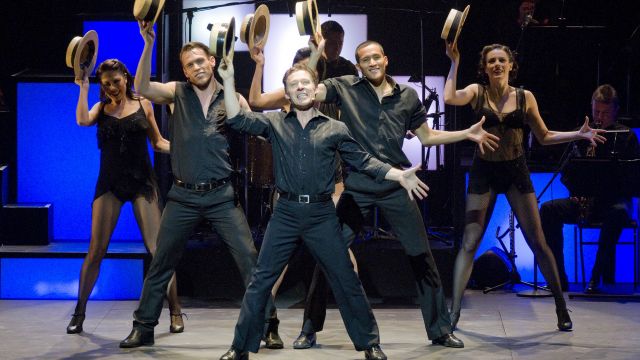 One local musical theatre performer planned to avoid Candy Man. He thought it wrong for a white man to play a black man.
But Candy Man isn’t a dramatized version of Sammy Davis Jr’s life; it is – in Wayne Scott Kermond’s words – “a homage.”
In 1986, Kermond had a role in Guys & Dolls. After the show, Davis came to the green room and said to Kermond: “We need young cats like you, to take over from old cats like me.”
So if it’s not the story of Davis’s life, what is it? Kermond weaves stories from Davis’s life – and his own – and uses Davis songs like a writer uses punctuation marks: to add meaning to the tales.
In “Sing Sing Sing”, the last song of the first act, the energy peaks. The second act opens at the same intensity and it builds from there. A height is reached with the tap-dancing, but the energetic climax comes from an unexpected twist – which doubles as a great marketing strategy – which I won’t spoil.
Apart from his other skills, Kermond carries the audience across a gamut of emotions, choosing the right one to express the heart of the song.
While the show isn’t a biography, you leave with insight into Sammy Davis Jr. Along the way, Candy Man delivers great showmanship.
Daniel G. Taylor