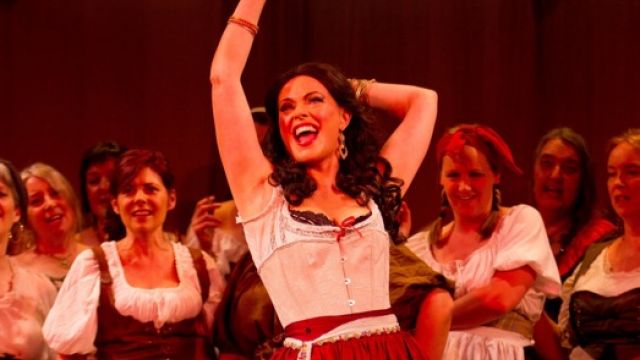 Though there was much to admire in Melbourne Opera’s production of Carmen I came away feeling a little disappointed. Part of this due to was bad luck. Kerry Gill replacing an ailing Lee Abrahmsen as Micaela  did very well.

Perhaps Jason Wasley as Don Jose didn’t have this option. Obviously struggling, he produced some thrilling top notes when required, but seemed to be saving his voice in the lower register, and because of this, it and his performance lacked passion.

I remember Dimity Shepherd playing Carmen for Eastern Metropolitan in the nineties. Her voice has matured beautifully and she was a seductive Carmen. Another member of that production was Simon Meadows, who graduated from Dan Cairo to Escamillo. It was pleasing to see how far he has come as he dominated his scenes, sang beautifully and really looked the part.

The simple set involved a semi-circular wall, which allowed for different levels. This worked well for Carmen’s and Escamillo’s entrances where the chorus sings about them before they appear, but we saw them on the upper level. However, had they been facing towards the back in the last scene when they were singing about the bull-fight inside the arena it would have been more effective. They were watching Carmen’s death outside instead. No one came down to intervene and at the end when Jose sang “Take me away” there was no one to do that.

The costumes were colourful and the lighting worked well. The chorus sang well, but lacked energy and weren’t always well coordinated with the orchestra, however, their diction was very clear. The dancers provided colour and movement in the limited space.

Perhaps not the most exciting Carmen, but there was lots of good singing to keep the audience happy.