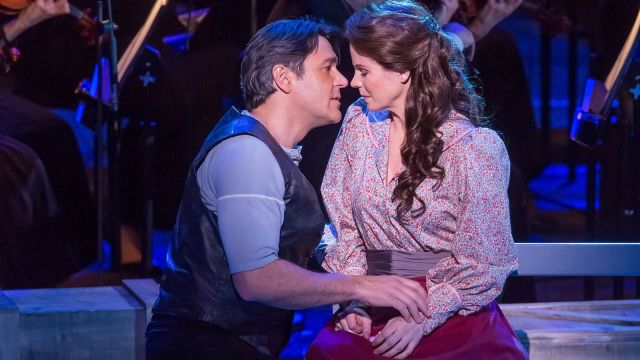 This version of Carousel springs from a performance on April 26, 2013, when PBS’ Live From Lincoln Center presented the New York Philharmonic’s concert-staging of Rodgers and Hammerstein’s iconic musical.

Top starred as Julie Jordan was Kelli O’Hara, playing her second Rodgers and Hammerstein heroine after winning a Tony for her portrayal of Nellie Forbush in South Pacific in 2008. Featured opposite her as Billy Bigelow was operatic baritone Nathan Gunn, who had been called by People magazine a “barihunk” and named their “Sexiest Man Alive” in 2008. Also in the cast was mezzo-soprano Stephanie Blythe, a fixture on opera stages around the country, as Nettie Fowler; Jessica Mueller, making her first Broadway appearance as Carrie Pipperidge, after winning Chicago’s Joseph Jefferson award for the same role; Jason Daniely as Enoch Snow; Kate Burton as Mrs Mullins and Shuler Hensley, no stranger to Rodgers and Hammerstein heavies, having played Jud Fry in Lincoln Center’s Oklahoma!, as Jigger Craigin.

It’s probably the most complete recording of the score, clocking in at 2 hours 20 minutes, and includes most of the things that are cut these days to shorten the piece.

O’Hara is a wonderful Julie (even if she does look a more mature mill girl alongside Jessie Mueller), but Gunn is simply sensational as Billy. He’s broody but likeable and his performance of “Soliloquy” is every bit as good as John Raitt’s original. He also brings loads of sexual chemistry to the role and a tenderness, especially in the finale, which is emotionally affecting. The famous extended bench scene which includes “If I Loved You” is beautifully played by both Gunn and O’Hara. She also shines on “When the Children Are Asleep” and “What’s the Use of Wond’rin’”.

Mueller, on the cusp of what was to become a major Broadway career, starring in Beautiful and Waitress, is very appealing as Carrie and a delightful foil for Daniely’s straight-laced Enoch.

Blythe, not the first opera singer to play Nettie, is outstanding on “You’ll Never Walk Alone”, whilst John Cullum, guest appearing as the Starmaker, adds musical theatre heft to a minor role.

The highlights are many and none more so than American Ballet Theatre dancers Robert Fairchild and Tiler Peck in the second act pas de deux dream ballet. Fairchild, who went on the star as Jerry Mulligan in An American In Paris on Broadway is a handsome and athletic Carousel Boy, but Peck is simply stunning as Louise, bringing grace and superb timing to the part.

As far as the staging goes, it’s a bare bones affair with the orchestra on stage and a few wooden boxes down front. Carousel is probably Rodgers and Hammerstein’s finest score and it’s great to hear it played robustly by the New York Philharmonic under the baton of Encores! musical director Rob Fisher.