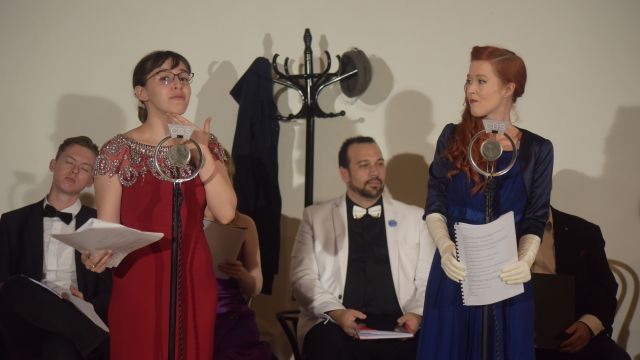 Based on the well-known movie, this radio drama was first performed in 1944 to raise money for the war effort. It was more than just cast members sitting on stage and moving forward to read their various roles but a visual presentation to be seen as well. Thus the audience became fully involved while some may have compared this to the original movie. Nash Theatre tends to start their programme each year with a radio play and this year they have chosen well.

Director Gary Klinger has done very well indeed in both his choice of cast and the innovations he brought to the production. The “readers”, who were sophisticatedly dressed in dark suits and long gowns, were casually preparing for the broadcast. This set the mood and the various movements throughtout helped to maintain everyone’s attention. We even had the advertisements for Lux Soap, “the soap used by the Hollywood stars”. The set consisted of various microphones (fake ones of course ), the piano and the sound effects table. So much can be achieved with so little. The nine member cast was uniformly strong. Adam Libke, who played Rick, the central character, did very well while Cameron Castle was an excellent Renault. Of the other male performers, Edward Haworth showed his talent in numerous roles, while Gavin Zimmerman, Luke O’Neil and Dominic Auer maintained the high standard. In the female parts, Simone-Maree Dixon was an effective Ilsa Lund but could use a little more volume and have her script in her hand to keep the balance. Georgiana Mannion and Constanza Acevedo Burckhardt were excellent with the Lux ads and in closing the play. Barry Haworth was the effective sound effects operator – and he did it in front of us.

This was a good night at the theatre thanks to Gary Klinger as the director, the cast and crew. Do yourself a favour and go to see/hear it. I strongly recommend it.