The Cat in the Hat 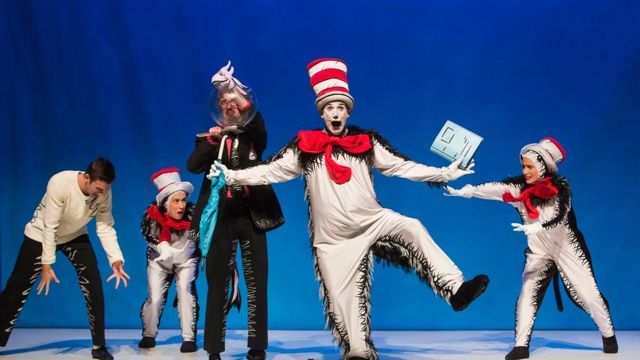 This high-energy show for kids aged 3-6 is being performed three times most days throughout January. The cast of six, plus stage management, work hard to great effect for the forty minutes and definitely deserve to have their names announced somewhere. But there are no foyer lists and no programs. Never mind, they are dedicated and keen, and they deliver genuine theatrical entertainment to a silent, packed house of tots, toddlers and juniors.

Performed to a pre-recorded soundtrack, the text is exactly from the much-loved 1957 Dr. Seuss book and the excellently flexible setting brings the famous illustrations to life. The kids around me, including my own highly critical crew, were, after the jump-right-in mimed introduction, utterly entranced.

When the anarchic cat arrives to entertain Sally and her brother who are stuck at home on a rainy day while their mother is out, the audience were hooked: even more so when the bright red box arrives containing the funny/frightening Thing 1 and Thing 2.

Fortunately, Google allows me to refer to the show’s 5 January Sydney Morning Herald review, so I can tell you that tall, twinkling James Stafford plays the behatted cat, that it’s Chris Pickard who delightfully manipulates and gives voice to the family fish, and that the kid-friendly soundtrack is written by Paul Clark.

As to who directs this excellent piece of under-6 holiday entertainment and from where it has come, the Herald is silent and, programless, so must I be.