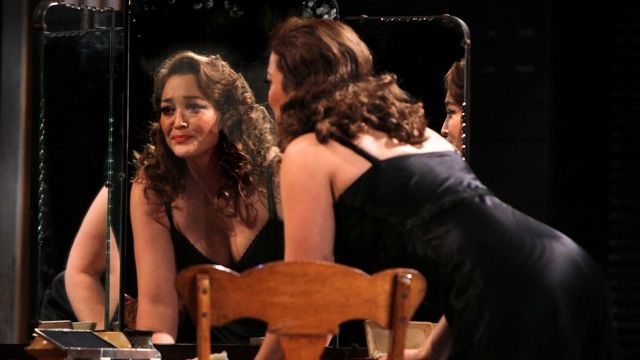 Space here limits me to revelations – issues that the astute direction and inspired performances attracted my attention:

The strong themes, mendacity and avarice, never loomed more clearly. Cherry’s actors cut through the smoke-and-mirrors of life in Williamson’s American Deep South where keeping up genteel appearances was so important.

Lack of love between Big Daddy and Big Mama is brilliantly portrayed by John Stanton and Carol Burns respectively. Both look on Brick (Tom O’Sullivan’s conviction and passion are brilliant) as the rightful heir, yet their oblique comments at times led me to suspect that elder-son Gooper (Hugh Parker, making the most of his minor role) might have been a product of Big Papa’s early infidelity? Cheree Cassidy plays Maggie as gorgeous, divisive, seductive and determined. She prowls and berates Brick for his dependence on alcohol. It is hard to decide whether she or the fecund sister-in-law Mae (Caitlin Beresford-Ord paints her as acquisitively, deliciously unlikeable) is the more avaricious about the eventual outcome of the plantation after Big Daddy’s death.

To enable the director to present Acts I and II (seven scenes!) as continuous action, Bruce McKinven designed an expansive bed-sitting room with lots of shuttered French doors opening out a long cool gallery overlooking the family plantation. David Murray’s lighting evokes the cloying atmosphere, including the token savage storm that parallels the mood in the revelations and resolutions of the final act.

This is a ‘must-see’ theatre event!