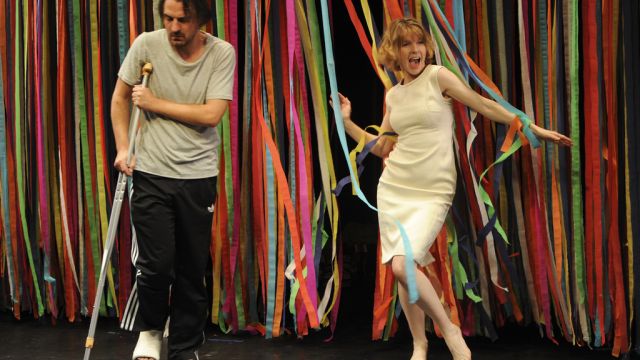 Simon Stone’s decision (explained at great length in the program) to use a contemporary setting and local accents for this very American play seems to work for the first half hour or so. As Maggie “the Cat” (Jacqueline McKenzie) hits the revolving stage through a cascading curtain of crepe paper streamers, complaining about her brother-in-law’s children to her off stage husband Brick (Ewen Leslie), while she tries on and discards a wardrobe of dresses, a local setting is believable. Maggie’s continual tirade about Brick’s family and their own relationship, and Brick’s brooding silence when he does enter, on a crutch after breaking his ankle the night before, could be happening anywhere, it’s true. In fact, the turmoil of their relationship and the underlying pain of each is manifest, as one would expect, in very fine performances. They reach behind the words to portray the inner torment and shame of the characters and the energy between them as the play progresses is palpable. 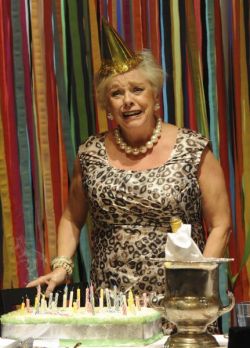 But, once the whole family is assembled, and the revolving mess of their relationships spills on to the stage, the ‘here and now’ becomes a little less plausible. William’s messages are still clear, and they certainly still resonate today, whether set in the present or in the deep south of America in 1955, but some of the characters don’t seem to bridge the forty odd years quite so effectively as do those of Maggie and Brick.

There is nothing wrong with portrayal of the characters or the pace and timing of the performances. For instance, Lynette Curran (Big Mama) and Marshall Napier (who has stepped into the role of Big Daddy at very late notice following the illness of Anthony Phelan), are well cast in these roles, and their energy and emotion build strongly. But who they are and what they have to say just don’t seem to ring true in a contemporary setting.

Nevertheless, the production is slick and the pace fast, helped by imaginative use of the revolve and some pretty fast work back stage at times as it turns.  For example, the play begins as a piano spins on. Then, in successive spins, Brick’s brother, Gooper’s (Alan Dukes) family of five children and his pregnant wife, Mae (Rebecca Massey) appear, singing in harmony. So Stone sets the stage for Big Daddy’s birthday celebration.

In another clever piece of direction, the revolve brings on Maggie’s wardrobe of shoes. As the ‘back stage’ area created by the streamer ‘curtain’ is only a third of the revolve, placing the shoes exactly the same distance apart on a moving revolve takes some well organised back stage choreography. Towards the end of the play, the revolve turns constantly as relationships fall further apart. It’s an effective directorial ploy, but lasts just a little too long. Alice Babidge’s costumes, are, as usual, perfect for the characters, especially the pink theme for Mae and her children. What an effective way to establish little ambitious wife and mother Mae’s character from the very first moments of the play! Robert Cousins has used the revolve and his colourful crepe curtain to keep the set minimalist but the effect unusual. Stephan Gregory’s sound design and Damien Cooper’s lighting add to the pace and energy of the production. The use of a strobe behind the ‘curtain’ to suggest fireworks, and the stunning bright light on Brick on his white bed after interval, are especially effective.

This may not be a production for purists and those who love Tennessee Williams. It is up-tempo and modern – and worth seeing for the strength of the performances, especially the electricity between Jacqueline McKenzie and Ewen Leslie. What a combination!