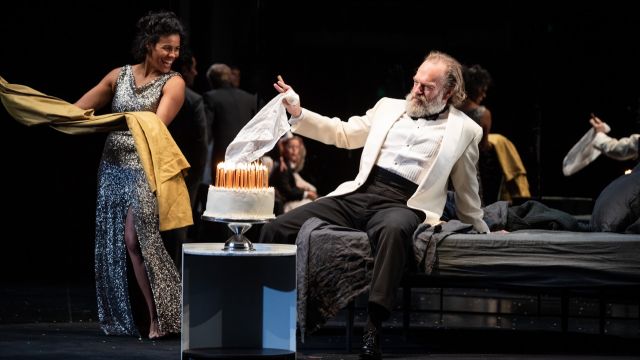 Tennessee Williams prescribed fastidious detail for the Mississippi mansion at the dark heart of his play about a privileged family living in lies and hidden contempt.

Kip Williams with designer David Fleischer sweeps it away for the empty stage he so often prefers, except for an island of mixed period, mirrored furniture. It outlines the sexless bedroom of the favoured son, Brick, a sports star turned drunk, and his frustrated wife, Maggie.

Maggie is the cat on a hot tin roof. She’s played brilliantly by an agile Zahira Newman, dominating the first half as she prowls and cajoles around her husband’s sexual withdrawal, but staying on that roof long enough to win the mansion.

It’s the birthday of plantation magnate Big Daddy and he’s supposedly just been given a reprieve from a deadly cancer prognosis. His bustling wife and his older, neglected, son, Grooper (Josh McConville) and his covetous wife Mae (Nicki Shiels) and their four wonderfully monstrous children all gather to ‘celebrate’ with cake – along with the ineffectual local preacher (Peter Carroll) and a cowardly doctor (Anthony Brandon Wong). Williams’ mesmerising Southern language, lilting and delusional then foul-mouthed and violent, uncovers through hints and counter-gossip the lies of this family.  Often they lurk in the shadows beyond the furniture, eavesdropping.  But Tennessee structures his focus so that each have the spotlight.

Huge Weaving brings awesome power, even a brusque empathy, to Big Daddy, a giant with a foot in the grave and demanding the truth. His greatest contempt is for ‘fat-arsed’ Big Mummy, played by the celebrated Pamela Rabe but with less nuance than expected. Daddy’s greatest love is for Brick. Harry Greenwood is perfect as the lanky defeated star, escaping into drink from self-loathing after an abandoned homosexual love.  It’s tears and thrills to watch these two (father and son in real life) pull the scab off that one.

Backed by Nick Schlieper’s sometimes astonishing lights, the slow rumbles or drums of Stefan Gregory’s sound and Mel Page’s colourfully expressive costumes, this is a big theatre, Gothic telling of a play which, of course, has less shock value than its New York premiere in 1955. The play is long and so often is the pausing but, with such an accomplished cast, it still reaches up to the gods to hit you hard. See it[Office1] .