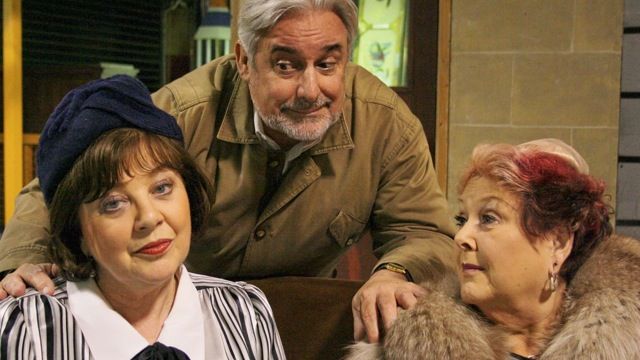 Don’t let the title put you off. This play by American Ivan Menchell was made into a lively movie in 1993 and director Loriel Smart has assembled a highly talented and experienced cast for your theatrical pleasure.

Julie Quick, Pam O’Grady and Penni Hamilton-Smith play three old Jewish ducks residing somewhere in upper middle class New York. Loriel Smart had them off with a bang in the opening scenes where they establish their larger-than-life characterisations to great amusement. All are widows in various states of getting over the death of their husbands. They don’t make an appearance but you get to know them quite well. Quick’s Ida is tentatively ready for new male company, while Lucille, played by O’Grady, has already been dating frequently and Doris is faithfully married to a dead man.  They are so great with their odd Jewish New York accents and they work together like they have been rehearsing for years - and that was the preview.

John Greene played a gentleman caller - his Sam is warm and genuine. With Quick’s Ida, they poignantly convey the mixed feelings and uncertainty around re-partnering, even if it’s only for dinner and a movie.  The other two don’t like the idea of losing Ida, as they are inwardly a bit stuck or jealous, and this provides some conflict in the plot.  Plot!  Get it!  Julia Whittle makes a brief but charming appearance as the other woman, another widow of course.

I admired the ensemble work greatly and the late night scene where the three widows are fueled with champagne was positively raucous. There are plenty of gags in the Jewish American comedy style and Loriel Smart and the cast make the most of it.  The only problem was that the scene changes took an eternity and the lack of imagination in interlude music.  Patsy Thomas and Stanley Tuck constructed a nice living room for Ida and Brian Budgen painted a fetching deep perspective of a very large cemetery.  Bravo to this wonderful cast.