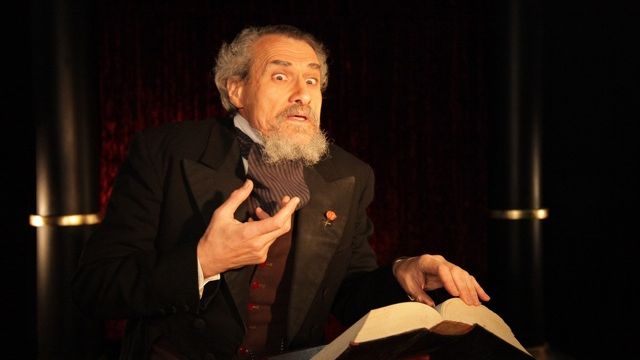 We live in a world where we’ve forgotten what a marvellous evocative storyteller Charles Dickens was. We’ve also forgotten the true meaning of Christmas and giving; of self exploration and change. How wonderful, then, that actor Phil Zachariah and director James Adler have once again combined to bring us this marvellous offering, which is not so much a play as an intimate soiree with Dickens himself round the fire in his drawing room.

Put simply, Phil Zachariah IS Charles Dickens – as well as the twenty or so characters from his story “A Christmas Carol”. Never at any time do you think you are watching an actor plying his craft, so beautifully drawn is his portrayal of Dickens. And of course we’re actually watching Dickens himself portray his characters; Ebenezer Scrooge, Bob Cratchit, Marley’s Ghost and the three Christmas ghosts; and even Tiny Tim are all seen through Dickens’ eyes, not Zachariah’s. It’s a masterful performance and Adler has directed it superbly. Every move, every gesture, has a reason behind it; small wonder that the show is now touring the world with great success. We all need a little Christmas, regardless of the season. The set is superb, though simple, Lucy Birkinshaw’s lighting design is excellent and it’s impossible to fault anything in this wonderful production which should be part of every family’s Christmas celebrations. I’ve been hearing about it for the past 10 years, but this is the first time I have been transported to Dickens’ Christmas and another world long gone.

The Athenaeum is the perfect theatre for this production. It seems lost in the late 19th century; slightly seedy but still in the thrall of Thespis. Carol singers greeted us in the foyer, and then ascended the stage to herald the way for Mr Dickens himself. I confess I had put Christmas out of my mind this year – but now it is firmly a joyful part of my life again thanks to this magical event.

Bah, Humbug to the rude people who did NOT turn off their mobile phones, and even one who kept reading his emails throughout! May Marley’s Ghost haunt your sleep, and relegate technology to the realms of Christmas future. As for the rest of us, Merry Christmas and, as Tiny Tim said (courtesy of Zachariah, Adler and Dickens) “God Bless us every one!”